Neon Genesis Evangelion generally falls into the category of anime in which you either love it or you hate it. Be it because it is over-hyped or the fact that it hasn’t aged well, it is generally a hit or miss for those new to it. Another key reason for this is that the anime gives the impression that it has a complex story. However, the majority of this complexity is due to its delivery. Granted, the meaningful imagery and themes are so abundant that it takes repeat viewings before someone will pick up on just a portion of them, but the story itself is told in its entirety with its ensuing exposition. As odd as it may be, the series’ combination of red herring imagery and its abstract method of character introspection is one of the core reasons many people got into anime. This is because with its mysteries and open-ended plot, Neon Genesis Evangelion is a thought provoking anime that triggers some deep philosophical questions on our origins and self-worth.

With a title like ‘Evangelion’ and elements like crucifix-shaped explosions, the Lance of Longinus and the bad guys being called Angels along with many other allusions to Christianity, one might think that these elements would trigger the viewer’s curiosity in this religion, but there is a saying that ‘nothing makes an atheist faster than reading the bible’. This comes double for anyone who watches fantasy or sci-fi anime. As after reading the bible, as well as many myths that came 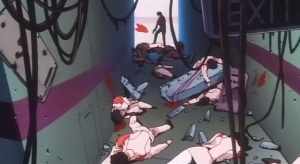 before it, one might notice similar magical elements between scripture and fantasy, leading them to think that the text is a work of fiction. Yet thinking certain religious texts are fictional shouldn’t be enough to stop them from believing in a God. After all, there are both Gods without religions like in Pantheism and religions without Gods like in Buddhism. Not being religious himself, the director Hideaki Anno used elements of Christianity to represent character growth and emotional issues that occur in the anime.

Neon Genesis Evangelion and its concluding film are brutal, especially for its main characters and, without spoiling any particulars, it doesn’t have the happiest of endings either. If one were to relate these horrific events to the horrific events that happen to real people around the world it might lead viewers down a similar path as Epicurus’ Paradox:

To summarize, if there is a God and he is all-powerful then he is cruel to A LOT of people, and, even if he’s not cruel to anyone in particular, would you still worship a cruel God? But just because people might not worship a cruel God, working in mysterious ways or otherwise, it still doesn’t determine whether this cruel God exists or not. The anime stresses the need for a balance as the main character resolves to keep on living in the hope of experiencing happiness along with suffering.

Scientific Evidence and the Burden of Proof

Without a basis for the belief in a God through a religious text, if one concludes them to be fictitious, nor a basis through morality, thinking God to be cruel, what foundation does one have to believe this idea on other than faith? It is through Neon Genesis Evangelion’s affinity to science, which we see through the Magi super-computers, characters like Rei Ayanami and Ritsuko Akagi and the Evas, that themes of likelihood and man’s comparisons to God’s arrogance becomes relevant. It is references to the ideals of evidence that shows how it is only the things we are ignorant about or misunderstand, such as the Angels, that are truly threatening to us. The point of science is to have evidence to observe reality, and without evidence the only thing keeping a belief tied to reality is faith. As with most narratives, it is the main characters’ ignorance in Neon Genesis Evangelion that triggers the most emotionally devastating backlashes.

Philosophical statements in Neon Genesis Evangelion on the fragile nature of truth raises the question; ‘If my truth is not based on evidence, couldn’t I believe anything undetectable to exist on the same basis?’ There are countless things one could believe to exist based on this premise, the different ideas of Gods being only a few examples. When we are given a look of what a God could be during The End of Evangelion, did you wonder if this is how other people imagined God? How would they have justified it? In the end, the question on beliefs should come down to what’s more likely to be true, things that have an observed consensus or mass subjectivity? For those who decide to stick with subjectivity, it is important to know that it is up to you to prove this claim and not the ones who deny it, and also that not knowing is no reason for believing (also known as the argument from ignorance or god of the gaps). As Bertrand Russell stated on the burden of proof,

“Some people speak as if we were not justified in rejecting a theological doctrine unless we can prove it false. But the burden of proof does not lie upon the rejecter…. If you were told that in a certain planet revolving around Sirius there is a race of donkeys who speak the English language and spend their time in discussing eugenics, you could not disprove the statement, but would it, on that account, have any claim to be believed? Some minds would be prepared to accept it, if it were reiterated often enough, through the potent force of suggestion.”

Death of the Author

The director of Neon Genesis Evangelion has stated multiple contradictory things about the show from saying that he only “used it [the Evangelion title] because it sounded complicated” to saying that “there’s obviously a deeper meaning” but that he’s “not going to spell it out for you [the fans]” and that they should figure it out for themselves. In other words, like with God, people are encouraged to adopt their their own views on it. Like a Rorschach painting, you need to create your own meaning in the places where the answers aren’t just given to you and from this creativity, you learn more about yourself in the process. This is stated beautifully at the end of the series when the characters say:

“It’s only the mind which separates reality from truth. Any new position from which you view your reality will change your perception of its nature. It’s all literally a matter of perspective. There are as many truths as there are people. But there is only one truth that is your truth. That’s the one that’s formed by whatever point of view that you chose to view it from. It’s a revised perception that protects you. That’s true. And one can have a perspective that’s far too small. However, a person can only see things from the perspective that they chose to see them from. One must learn to judge things via the perceived truths that one receives from others. For example, sunny days make you feel good. Rainy days make you feel gloomy. If you are told this is so, then that is what you believe is so. But you can have fun on a rainy day as well! Your truth can be changed simply by the way you accept it. That’s how fragile the truth for a human is.”

In the end, this is the core philosophy of what makes Neon Genesis Evangelion so important and it is this line of dialogue that helps people to understand the subjective nature of reality and their own beliefs.

Posted on Oct 12, 2015 by
Lazarinth
Quit being a security officer, high school teacher and decent human being to become a journalist. Read more of my stuff at my blog: https://fantasyandanime.wordpress.com/
Edited by Aaron Hatch, ChrisKeene, Misagh, YsabelGo, Cojo, Kai.
Follow