Penderecki and the Sound of Horror

Over a century of horror movies has made for a plethora of horror villains — haunted houses, zombies, monsters, the evil acts committed against one another — or a number of unseen forces whose consequences and effects give the film its raw immaterial fear. Even with the variety of manifestations of horror over its lifespan in film, one characteristic of horror has been consistent throughout: the element of sound that is crucial to the horror experience.

Ever since the inclusion of sound in film the unsung villains of horror movies have been their crawling and ominous scores and soundscapes. Where would the classics of the proliferating genre, or the overall atmosphere we come to expect in horror be without the innovative sound design and composition techniques of Bernard Herrmann, Krzysztof Penderecki, and John Williams? (to name a few.)

In King Kong (1933) we see the first OST, or original soundtrack written for an American “talkie” according to Sound Field (PBS), which was only slightly after the first feature film presented as a talkie which was 1927’s The Jazz Singer. The talkies, or talking pictures, were the first sound films to include synchronized dialogue. Before that sound films would include only accompanying music or recorded dramatic effects.

The first horror film was a French short — just over three minutes long which translates to 60 meter of film — called Le Manoir du diable, or The House of the Devil. This was released in 1896. The film was discovered in the New Zealand Film Archive in 1988 after presumably being lost. The music that plays over the short film has a minimalist tendency that gives it an ominous feel reminiscent of a spinning ballerina music box. Eventually this tin sound is accompanied by a chorus of vocalists.

Part of the creepiness of the music is also its modal quality and by this I mean its key signature in relation to the mode of the major scale that is being played. The song centers around a Lydian scale, the 4th mode of the major scale which contains an augmented fourth, or a tritone. Otherwise known as the devil’s interval, this famous interval has a history of avoidance due to its dissonant sound which was largely interpreted as a manifestation of evil.

Why this perceived interplay between diabolic forces and music? This is a huge question which spans areas from tonal theory to human physiology, but for our purposes we will just say the relationship between fear and the ear is not entirely new.

‘The world of the ear is more embracing and inclusive than that of the eye can ever be. The ear is hypersensitive. The eye is cool and detached. The ear turns man over to universal panic while the eye, extended by literacy and mechanical time, leaves some gaps and some islands free from the unremitting acoustic pressure and reverberation.’

This is a quote from Canadian media guru and philosopher, Marshall McLuhan (from an essay called ‘Clocks’ in Understanding Media: Extensions of Man, 1964). McLuhan touches on what is central to the experience of modern horror: though we can be afraid of what we see on screen, a massive part of the medium is the characteristic and unrelenting sounds of horror. Sound forms the very atmosphere of what horror has become. This is true from building and atmospheric suspense to the widely-used jump scare.

An early example of the jump scare is also one of the most famous examples of what is called a ‘stinger chord’: sharp, screeching notes played by shifting on the fretting hand on the strings to give a stabbing or stinging effect. This was in one of the most famous scenes in horror film history, Alfred Hitchcock’s classic shower scene in Psycho (1960). This example of a stinger chord by Bernard Herrmann, the composer responsible for the music of Psycho, is one of the foundations of characteristic sounds in horror film.

Later composers and music directors began to make use of innovative sound design techniques as much as they would select and write music for the screen. The Texas Chainsaw Massacre (1974) made use of animal noises to set the stage but also has another terrifying sound effect that preserved its effect all the way up until the 2004 remake. This effect was created by ringing a tuning fork before rubbing it along a piano string to bring out unsettling overtones for a brief moment.

Consider as another example the iconic whisper sound effect in the Friday the 13th film series. Composer Harry Manfredini shortens the words ‘kill’ and ‘mommy’ into the characteristic ‘ki-ki-ki-ma-ma-ma’ and sets audiences’ hair on edge. This short auditory effect is as memorable as any moment in virtually any of the Friday the 13th movies. It becomes part of the lexicon of the sound of horror. Building on previous techniques, the Friday the 13th movies are also chock-full of stinger chords to accentuate jump scares.

Then there is the association of playing a low E and F in sequence that is inseparable from the terror felt in Jaws (1975) thanks to prolific composer John Williams.

We also have John Carpenter’s strangely simplistic but creepy musical piece in 10/8 time in Halloween (1978). Carpenter attributes one of his major influences for the original score to William Friedkin’s soundtrack in The Exorcist (1973), in particular Friedkin’s use of part one of Mike Oldfield’s ‘Tubular Bells’, the track most commonly associated with the film. The influence of the minimalist style can also be heard, with new instrumentation, in the music of George R. Romero’s Day of the Dead (1985) and music by John Harrison.

Another massively influential piece of music included in The Exorcist is a piece by Polish composer and conductor, Krzysztof Penderecki which according to Sound Field (PBS) changed the sound of horror music forever. 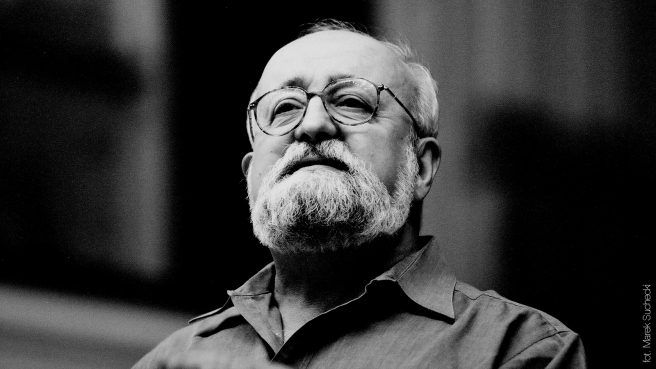 Penderecki was at the cutting edge of experimental or avant garde composition. “All I’m interested in is liberating all sound beyond tradition,” he said. With this attitude, Penderecki composed disturbing compositions bereft of traditional tonal movements or rhythmic form.

Instead his compositions consisted of what are called sound masses, or large clusters of tones which form an eerie lack of centrality, in which individual pitches are de-emphasized. There are no key signatures, cadences, or any traditional elements associated with the orchestra; there are subtly moving to chaotic sound masses which build in volume and unpredictability giving an absolutely unsettling feeling all too familiar to horror fans and accentuating the horror on screen. In this way Penderecki revolutionized the means of embodying anxiety through sound.

In 1973, Penderecki’s ‘Polymorphia’ is used by director William Friedkin in The Exorcist (and later by Stanley Kubrick in The Shining (1980) which also contained five of his other pieces). Famously, The Exorcist shocked audiences to the point of being vomit-inducing. This is in part because of the disturbing use of cutting-edge onscreen effects and the experimental soundscapes of Penderecki.

In a very real way, Penderecki’s sound masses in compositions like ‘Polymorphia’ represent a pinnacle of terror embodied in sound. The chaotic sound of Penderecki’s composition becomes characteristic of subsequent horror soundtracks and his influence can be heard to this day in any number of horror films.

With new use of techniques including extensive use of compression, limiting, and the like, new sound design methods ushered in by a new era of digital audio production in film as well as in popular music. Audiophiles have a love/hate relationship with this. But new technologies can also be used to throwback to a prior time. Homage to an earlier era of the sound of 80’s horror can be heard in Netflix’s thriller series Stranger Things, and the recent classic It Follows (2014). It Follows does an excellent job of making use of the Penderecki-style sound masses as well as the later synth-based melancholia creating the ambiance of an 80’s classic in the modern era. These days low frequency effects — often near the lower range of human hearing just audible enough to disturb us — and similar digital techniques are more widely heard while the immortal style of Penderecki lives on.

As everyone knows, it is often what we do not see on screen as much as what we do that builds terror and fear. The ultimate unseen monster, never seen but always felt in horror to this day, has been the realm of the aural.