Real or Reel? The Complicated Personas of Political Comedians

On August 6, 2015, the media was flooded with nostalgia and heartfelt good-byes as Jon Stewart signed off of The Daily Show for the last time. Some sixteen years earlier, Stewart had taken the reins from Craig Kilburn and steered the show toward a more political front, tackling issues from the left side of the political ring. Since then, The Daily Show has become an institution in U.S. television, skewering American politics with spot-on lampoons. Its correspondents have gone on in the same vein to host their own politically-tinged shows, notably Last Week Tonight with John Oliver and The Colbert Report, a spin-off based on Stephen Colbert’s satiric correspondent character on The Daily Show. It was a bittersweet day for America when Stewart stepped down and made way for a fresh new face, Trevor Noah, and it’s worth considering why Stewart’s departure touched so many people.

Like his successors Trevor, Colbert and Oliver, Stewart was a charismatic frontman for a team of whip-smart, informed writers who work behind the scenes to produce what we ultimately see on the television. This formula is key to a successful comedic yet ultimately political show. These shows—The Daily Show, The Colbert Report, Last Week Tonight—lend a sense of levity in trying times. They use alluring personas to reel in an attentive audience with their charm and sense of humor before lambasting corruption and airing out other important issues that have been largely overlooked. These anchormen are not merely pretty faces; their personas are a key tool in enticing viewers (especially young adults) to turn their attention—and hearts—toward the news.

In 2012, a now widely cited poll from the Pew Research Center showed that The Daily Show and The Colbert Report had the highest percentage of young viewers (18-29 years) among news outlets, with 39 and 43 percent respectively. That’s unsurprising, considering young peoples’ preference for digital media, as well as the hosts’ alignment with liberal viewpoints that are widespread among today’s younger generations. What’s troubling is the fact that these shows are included alongside such legitimate news sources as The New York Times, The Wallstreet Journal and TV programming found on news channels such as CNN. The same poll indicated that 17 percent of young viewers thought The Daily Show was the most accurate news source after CNN, despite the fact that Jon Stewart and company have explicitly claimed not to be sincere journalists. So why do so many young people trust them? 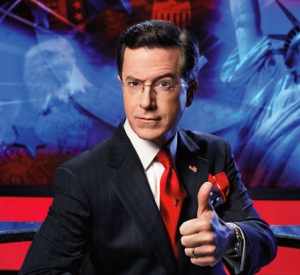 Certainly, these political comedians are entertaining. Just try watching an episode of The Daily Show without at least chuckling to yourself. Even a staunch Republican might chuckle at one of Stewart’s quips about Dick Cheney years after the shooting incident. In a world of bleak stories flooding the news, people look for a little light. Political shows that use humor to draw awareness to issues make people feel more informed without feeling like they’re wasting valuable free time on boring news segments. It’s a form of “slacktivism,” or feel-good support for politics that has little or no practical benefit. However, the fact that every so often something real—or even somewhat real—comes of it reveals the depth of the public’s trust in these comedic news anchors.

Despite the distinct awareness that these opinionated TV personas are made to manipulate us, these political comedians have on occasion invoked real-life action. Colbert in particular blurs the line between pundit and politician. His Super PAC, “Americans for a Better Tomorrow, Tomorrow,” reportedly raised over 1.02 million dollars in 2012, after an ill-fated run for presidency in 2008. But Colbert and his colleagues are not politicians. They may have political agendas, but ultimately their allegiance is to entertainment. They are paid to host a television program, not to make laws. Nor are they true journalists; they aren’t bound by journalistic ethics or any publication’s obligation to present unbiased information. Their intent is to entertain viewers. They do present factual information and evidence to support the points they want to promote, but their segments are not comprehensive.

The argument has been posited that watching the news is easier than reading it, which is especially true when it’s broken down in easily digestible segments like The Daily Show et al. tend to do. This might account for people’s preference of these shows over newspapers, but what about news channels on television? The every-day schedule that The Daily Show (and Colbert before it ended) follow may be a contributing factor in the public’s reliance on these shows for news. For regular viewers, watching the same captivating presenter night after night 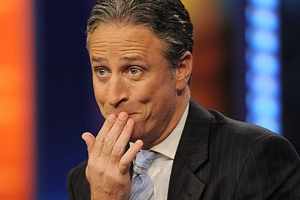 can feel like listening to a friend, or at least someone you know. Humans crave the comfort of familiarity, but we might also find such familiarity in watching right-wing pundits like Rush Limbaugh or Glenn Beck every day. Indeed, programs like The O’Reilly Factor can be seen as analogous to The Daily Show. Watching these two opposite-leaning, caricature-esque hosts go head-to-head on either program is always something to behold. However, the reason these conservative shows lack the following of the more liberal counterparts is simple: their hosts lack the charm and, when it comes down to it, the humanity that political comedians like Jon Stewart hold dear.

Humor, along with general charisma, is possibly the biggest reason people tend to believe comedic anchors. Having a sense of humor is a mark of human emotion and intelligence. A robot could relay the facts of any news story, but weaving them together with a sense of humor and compassion makes it captivating. It creates a sense of closeness, of trust, that doesn’t exist between citizens and cold facts. And in spite of this well-thought-out persona—the smart, funny, charming political comedian—what’s even more attractive to viewers is when they break out of this formulated routine and reveal sincere emotions. The true appeal of hosts like Stewart shines through in the moments when the anchor breaks character, expressing their own personal distress over the most recent tragedy. In doing so, they make us trust them all the more. Even though the majority of what they present is a calculated script meant to entertain an audience, the honest, unscripted moments are what make us trust these characters even more, as people and as news anchors.