6 Steampunk Books To Get The Gears Turning

“All those books and movies about extraordinary gentlemen in capes and top hats scurrying through foggy night-time London on secret errands that involve infernal devices and wonderful machines with elaborate scrollwork on the gears and levers.”

Or, perhaps, the way the Internet meme describes it: 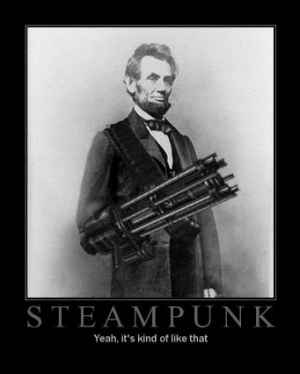 Steampunk is a bastard child of urban fantasy and Victorian sensationalism; a fantasy subgenre obsessed with an alternative past. Imagine a universe where the future comes without the benefit of computers, cars, radios or television. Technology remains mired in the age of steam; the inventions of Nicola Tesla and the politics of Bismarck are the basis for society. Steampunk is a world made of clockwork, automatons, airships and locomotives; men of metal and cogs, mad scientists, corseted femme fatales, airship pirates and time travelers.

To paraphrase a favorite saying about another confused genre: I know steampunk when I see it. To that end, here are a few suggestions about to make your first foray into the madcap world of steam-powered tales. 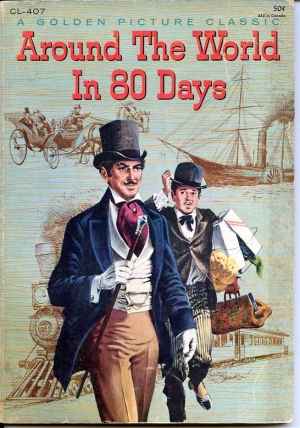 If you want to know where steampunk comes from, you’ve got to read Jules Verne.

Based on the technology of his time, Verne’s late 19th Century fantasy novels combine Victorian sensibilities with bizarre plots and new technologies. His novels are short, punchy books, often matter-of-fact accounts of strange happenings. The best and probably most well-known of these is Around The World In 80 Days.

The novel follows the adventures of Phileas Fogg, an English gentleman who lives a life of perfect precision: rising at exactly the same time, shaving with water at exactly the same temperature. One day he accepts a wager for 20,000 pounds that he can travel the world in exactly 80 days. Accompanied by his valet Passepartout, Fogg sets out on his journey by steamship, train, and balloon. Scotland Yard detective Mr. Fix pursues the pair after mistaking Fogg for a bank robber. The novel is a romp, a sly puncturing of English idiosyncracies, and a bizarre travelogue.

Fogg is the precursor to later steampunk heroes, the gentlemen adventurers in top hats and tails. He’s a quintessential English gentleman, overly confident in his abilities and heroic to a fault. Verne mastered the verbosity that one associates with late Victorian literature in his description of exotic locales that don’t quite tally with the real world. The moment that Fogg and Passepartout board a hot-air ballon, you know that you’re in a land of steampunk. It is the case of an English gentleman being placed in an odd locale and taking it all in very English stride.

If Verne is the old gent weaving tall tales, H.G. Wells is the crank who believes everything he says. Wells’s 1895 novella The Time Machine has the distinction of so directly inflencing steampunk that one of the very first steampunk novels was written as a sequel to it.

The novella follows the story within a story as the unnamed Time Traveller recounts a story of his fourth-dimension adventures to some rather skeptical friends. In his travels to 802,701, he uncovers a world divided into two types of humanity: the gentle Eloi and the degenerate Morlocks. The Eloi have adapted to an environment where intellect and strength is no longer necessary for survival; they are threatened by the Morlocks, who live in the darkness and possess an atavistic power and cleverness the Eloi lack. The Time Traveller believes that the Eloi are evolved from the upper classes, while the downtrodden Morlocks evolved from the lower, bringing the problematic issue of a class-stratified society into what’s ostensibly a fantasy tale.

The Time Machine provides a second blueprint for the development of the steampunk genre. Time travel figures into many later steampunks, while the figure of a gentleman inventor goes hand in hand with the tale of an adventurer. The Time Traveller bends technology to his will without bothering to consider the dangers; and like most such protagonists since Dr. Frankenstein, he’s punished for it. The inherent class critique – which can be read several different ways – forms the basis for the class-stratified dystopian societies that pop up in later steampunk novels. Wells’s account will find its echo in K.W. Jeter’s Morlock Night, a sequel to The Time Machine, and Infernal Devices.

Time travel comes back with a vengeance in Michael Moorcock’s Warlord of the Air. The novel marks one of the first major forays into the steampunk genre, long before it had a name and was still simply considered historical fantasy.

The story concerns Oswald Bastable, a soldier in 1903 who ends up in conflict with Indian high priest Sharan Khan. Bastable gets lost in the caves below a Temple, falls asleep, and awakens to find himself in 1973. But this 1973 is a world in which the First World War never happened, the major powers remain colonial and control the world via a massive airship armada. Bastable becomes horrified by the imperialism he discovers in 1973 – a direct product of the world he left behind in 1903 – and eventually plays an unwitting part in a catastrophic (and recognizable) disaster.

Warlord of the Air combines true history with Moorcock’s alternate future. It takes the themes of The Time Machine and manipulates them. Moorcock is writing in 1971 about a 1973 that never happened, from the point of view of a soldier from 1903. Rather than projecting a future, it projects an alternative past that is – bear with me – actually for the future for his characters. Wells’ was to examine a future if the present did not change; Moorcock’s project is to examine a past that never existed. The novel brings forward steampunk’s ‘what if?’ motif, which will figure in to many later novels. What if World War I never happened? What if technology never advanced? What if the imperial powers remained imperial? And what does that mean for contemporary life? It is a story about becoming unmoored in time.

Following Moorcock, we come to the first ‘true’ steampunk novel that would solidify a subgenre. While K.W. Jeter might be better known for his sequel to The Time Machine, Infernal Devices remains my favorite Jeter-penned steampunks because it is so gloriously, and uniquely, weird.

The plot of Infernal Devices begins with George Dower, a London watchmaker struggling to live up to his inventor father’s name. Enter ‘The Brown Leather Man’, with a device that Dower’s father created many years before. Things get progressively stranger after that, as Dower is threatened by people from the future, uncovers a weird race living in the London borough of Wetwick, and travels England in pursuit of a secret he barely understands, but to which he is the key.

Infernal Devices is a pastiche of genres – part Victorian mystery, part fantasy, with healthy doses of everything from Wells and Verne to Conan Doyle and Irish folk legend thrown in for good measure. Dower has his very own Passepartout in Creff, his blunt but capable manservant. There are diabolical masterminds, time travelers, strange creatures, femme fatales, mad scientists and nefarious plots for world domination. Automatons and clockwork, along with the invention of a non-existent London, place Infernal Devices squarely in the middle of the steampunk subgenre. It’s a bizarre and slightly crazed book, very different from Jeter’s oddly serious Morlock Night. What does steampunk look like? It looks like Infernal Devices.

Picking a single book which features Blaylock’s gentleman inventor Langdon St. Ives is next to impossible. I choose Lord Kelvin’s Machine not because it is necessarily the best in the chronicles, but because it so perfectly encapsulates what makes Blaylock’s work steampunk.

Like Warlord of the Air, Lord Kelvin’s Machine melds history with fantasy to build a strange new world. Blaylock’s hero Langdon St. Ives has lost his beloved wife Alice; his one goal is now to either discover a way to time-travel in order to save her, or to die in the attempt. His arch nemesis, the Moriarty-esque Dr. Ignacio Narbondo, is at the bottom both of Alice’s death and a nefarious plot to destroy the world.

Lord Kelvin’s Machine is an excellent introduction to Blaylock’s world. Like Dower, the Time Traveller and Phileas Fogg, Langdon St. Ives is a gentleman and an inventor, a dashing scientist, explorer and all-around hero – the sort we tend to associate with the Victorian era. He has not one but two faithful companions – his valet Hasbro and his associate Jack. The element of time travel so important to other steampunk novels is here in force, as is the ‘diabolical mastermind’ who wants to either destroy the world, or control it. 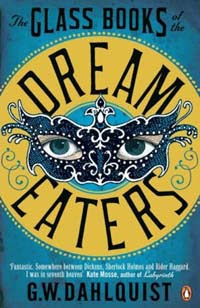 There are many complaints to make against The Glass Books of the Dream Eaters. The novel is meandering, the language can be overindulgent and the heroine at times is far too twee for my liking. And yet it is also a remarkable book. One of the best, weirdest contemporary steampunks to date. Blaylock and Jeter give us a strange but comforting world, still obeying the laws of rationality and the almost superhuman powers of their main characters. The Glass Books of the Dream Eaters is a descent into the maelstrom.

The novel takes place in what I initially thought was an alternative London – however I find that there are no references to London at all. It follows closely the experiences of three main characters: Celeste Temple, a jilted young lady who follows her ex-fiance to a party; Cardinal Chang, an assassin with a penchant for razor blades; and Abelard Svenson, a royal doctor to one of the many dissolute aristocrats running about the place. Together they must foil the plot of a sinister cabal at Harschcourt Manor, uncovering a plot to – that’s right – take over the world. The plot strands featuring all three, before they are united, overlap and intersect as each discover a piece to the puzzle that will uncover a diabolical plot involving bringing our deepest, darkest fantasies to life.

The Glass Books of the Dream Eaters is a violent, overheated and erotically charged book, far more bizarre than anything Jeter and Co. have ever come up with. It has been rather unfairly maligned, I’m afraid, and probably not given its due as a work of steampunk gold. Dahlquist is the H.P. Lovecraft of the steampunk genre: verbose, grandiose and wild, but tons of fun for all that.

These are just a few tiny samples of a large, sprawling genre that encompasses and permeates other genres, from horror and thrillers, to adventure and westerns. For my money, these are some of the best steampunk and proto-steampunk books in existence. But if that’s not enough, here are a few more to take a look at:

Journey to the Center of the Earth (Jules Verne, 1864)

Posted on Jul 26, 2013 by
Lauren Brooks
Lauren is a freelance writer with a longstanding interest in horror film, British TV and steampunk literature. She holds two Masters in Film and Creative Writing.
Follow