You’re sitting in a theater. Your hands dig into the popcorn bag. Your mouth dries as the salt and butter strip it free of moisture. Your heart thumps in your chest as a dramatic action scene plays out in front of you on the screen. The characters that you’ve spent the last two hours getting to know are in danger of losing their lives as explosions blast through the theater speakers and you feel your emotions swell with the music that rises to a crescendo and peters out as the final blow of the battle is landed. The music stops or grows softer. A piano note here and there that signifies the end of the film. There is an emotional release and you feel your body calm down as the adrenaline rush cools.

You haven’t just watched a movie. You’ve experienced it. And it was due, in part, to the magnificence of the score. Sure, the director, writers and actors spent time crafting the narrative that you follow with your eyes, but your ears follow the musical cues. Good music is evocative, and in combination with a great film, will definitely impact your mood and the way you view the film. The goal isn’t necessarily to determine whether or not the music is good since interpreting music as either good or bad is entirely subjective. Instead, the goal is to describe how brilliant execution and placement of certain musical beats can make for an objectively awesome viewing session.

To start with three examples of wonderful execution, you just have to take a look at three films from this past year: Mad Max: Fury Road, Jurassic World and finally, Fifty Shades of Grey.

Fire, Blood and A Lot of Drums

First, we begin with Mad Max: Fury Road. The fourth entry into the Mad Max franchise, the film follows the Road Warrior, Max Rockatansky, as he is captured by a wasteland dwelling society, only to be intertwined in a chase for redemption with the objectively awesome Imperator Furiosa. The story of the film is relatively simple: it’s a two-hour action/chase scene. The characters aren’t necessarily fleshed out so much through dialogue, as they are through the actions that they take. It is a well-acted film and 70 year old film-making veteran George Miller does a masterful job at crafting every shot in the film. Another major part of Fury Road‘s success according to critics is its score.

“This is going to be a movie you want to turn up the volume. In conjunction with the glorious visuals, this score will answer your prayers. It has successfully created a feeling of fun and violence in a way I didn’t think was possible, not at the level it presents itself. The synergy of sound effects and music has buried itself deep inside my skull and I don’t want to ever take it out.” – Jørn Tillnes, Soundtrack Geek

Tom Holkenborg (also known as Junkie XL) crafted the score of Fury Road, and it isn’t all just percussion and violent guitar solos. There are moments where it’s so beautifully orchestrated that it captures a sense of beauty and wonder in the dry waste of Fury Road‘s world. There are musical sequences like “Blood Bag” and “Brothers In Arms” that make your blood rush through your veins as cars explode and “Witness me!” is bellowed to the heavens. Then, there are intimate pieces like “Many Mothers” that make you feel the pain, desperation and anguish of the characters. Even the flame-throwing guitar player manages to factor into the score, twiddling his fingers and blasting powerful notes. Every emotion that the film takes you through is governed by the visuals but also shepherded by a masterful score. This a shining example of musical execution gone right.

There are some moments where a composer creates something so marvelous and iconic that you can’t imagine anyone attempting to follow their performance. John Williams is one such composer, leaving an indelible mark on every film that he score. The Academy Award winning composer arguably does some of his greatest work on Jurassic Park. Everyone knows the film’s theme. Everyone can hum the theme. It has transcended generations and captured the imaginations of youth in ’93 as well as those born afterwards.

So of course, when it was announced that another person would be scoring Jurassic World, the fourth entry in the Jurassic Park franchise, people were waiting in eager anticipation and skepticism. Not only does Michael Giacchino manage to capture the spirit of the original film with nostalgic remixes to the original’s soundtrack but he also adds his own flare to the mix and it feels, it breathes Jurassic Park. Horns blare, strings touch your inner ear and the piano notes tug at your heartstrings. Scores like “Welcome to Jurassic World” and “The Park Is Closed” are standout examples of nostalgic remixes to John Williams’ score while “As The Jurassic World Turns” and “Nine to Survival Job” capture the magnificence and wonder of John Hammond’s vision for a theme park filled with happy families as well as the overall spirit of Jurassic Park as a franchise. 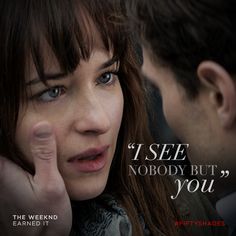 Now, if there was any film that had a beautiful soundtrack of beautiful songs, it is Fifty Shades of Grey. This is the one part of the list that has only two “orchestral pieces”, instead relying on an abundance of original songs tailored to the film. “Earned It” by the enigmatic The Weekend is in itself a masterpiece that serves to amplify the tension between the two main characters. The opening track, “I Put A Spell On You” by Annie Lennox, is another song that just sets the tone for the relationship between Christian and Ana. And while every song isn’t original like Beyonce’s “Crazy In Love” and Frank Sinatra’s “Witchcraft”, they all fit within the tone of the series and help to establish and maintain the air of mystique that the film has, even if the film itself essentially stomps and sets fire to the work that the music puts into assisting it.

In the end, music has the power to impact the mind of those who listen to it, just as films have the power to impact the minds of those that watch them. In proper conjunction, music and film can blend together to create masterpieces that change the viewer and listener into one who experiences the film. It will make you feel the despair, adrenaline and bone-crushing beauty of Mad Max: Fury Road. It will make you feel like Christian and Ana aren’t just cardboard cutouts talking in the big screen adaptation of Fifty Shades of Grey but that their love is something phenomenal. It will make you relive the nostalgia, joy and terror of your childhood as you see John Hammond’s vision come true and subsequently be destroyed again in Jurassic World. Music is power. Music is life and as Friedrich Nietzsche said in Twilight of the Idols, “Without music, life would be a mistake.”