Despite its overwhelming popularity, The Hunger Games is born and bred for intellectual discussion. Though its agenda is ever present throughout the series, its success is based on a core love of ingenious material and though-provoking ideas. Suzanne Collin’s satirical and allegorical young adult series exposes young people as primary sources of power and intelligence. Despite mean-spirited preconceptions about youth, the books and movies are grasping an impressive array of followers. The second instalment, The Hunger Games: Catching Fire, like its main character, swiftly and assuredly hits its targets. It’s a kinetic and awe-inspiring slice of family-friendly entertainment (so long as each family member overcomes the societal torture and brutal murders). Despite the heaviness, its intriguing style and characters will push viewers toward this undying quest’s resolution.

This instalment, striving for a more mature audience this time around, delves into the darkness to reveal sinister secrets and treacherous obstacles. This gripping and impactful sequel, outclassing the original in every respect, allows us to ask, then answers, the series’ most important question – what is the Hunger Games’ true purpose? This sequel continues the agonising adventures of caring sister/daughter and skilled bow-woman Katniss Everdeen (Jennifer Lawrence). Stranded in the apocalyptic wasteland called Panem, Katniss must outlive her brethren in one of twelve decrepit districts. District 12, the poorest and most violent zone, houses Katniss’ family and fellow Hunger Games victor Peeta Mellark (Josh Hutcherson). Spending quality time with old friend and mining labourer Gale (Liam Hemsworth), Katniss strives to keep her district from death’s door. Unfortunately, the towering cityscape known as The Capitol looks down upon each district. Its malicious and deceptive leader, President Coriolanus Snow (Donald Sutherland), keeps Katniss and Peeta in line to avoid a rebellion. When their ‘romance’ fails to win over the masses, Katniss and Peeta, aided by Haymitch (Woody Harrelson), Effie (Elizabeth Banks), and Cinna (Lenny Kravitz), look for an alternative solution to Panem’s societal issues. Snow, aided by Plutarch Heavensbee (Phillip Seymour Hoffman) and Caesar Flickerman (Stanley Tucci), organises a distinct version of the Hunger Games known as the Quarter Quell. Organised every 25 years, the Quell places previous victors against each other in a sprawling and dangerous habitat.

As the Empire Strikes Back of this all-important series, Catching Fire is a gutsy and vibrant sensory assault. Adaptations like The Host and Twilight (having given young adult fiction a bad name) are wholly eclipsed (pun intended) by The Hunger Games franchise. Unlike the aforementioned soapy book series’, The Hunger Games has an engaging premise and unique ideas. Despite the cliffhanger ending and unanswered questions, Catching Fire explores concepts and themes only lightly touched upon in the original. The original, despite its surprising charm and revelatory performances, contains gaping holes and unavoidable flaws. Here, director Francis Lawrence (Constantine, I Am Legend) throws the audience into this visceral story. Staring them down for its 2-hour run-time, we are invited to share in their pain and rebelliousness. With the original ignorantly cramming plot-points and concepts into its exhaustive run-time, Catching Fire smoothens out the rough edges whilst pleasing die-hard fans and average moviegoers alike. Despite picking up from the original’s convoluted story, newcomers could still easily become immersed in this punishing tale. Despite its potential to depress adults and terrify children, Catching Fire reaches for its most eagerly awaited concepts. Viewers pining to see certain characters, plot-strands, and symbols from the labyrinthine novels will be delighted with this instalment. The plot, following the original’s evolving and inter-twining structure, discusses the societal, cultural, and political aspects of this peculiar premise. The first third is spent with twelve districts’ grime-covered and frustrated inhabitants. Describing the gravity of their situation, Katniss and Peeta’s motivational speeches elevate some of Catching Fire‘s most potent and informative scenes. Their conflict, defined by the two leads ignoring one another, over-acting for the cameras, and building affection, is more important here than in the original. The movie then turns up the heat, and the aptly titled ‘Girl on Fire’ must fight for survival. Despite Catching Fire‘s laboured pacing within the first half, the moral and political questions make for a powerful blockbuster. I, normally losing interest before the kinetic action sequences begin, was surprisingly enraptured by the story’s familiar strands and engaging standoffs.

However, the story doesn’t rest on moral dilemmas and murderous characters alone. Despite becoming heavy-handed by the second half, the movie touches on relevant issues yielding familiar consequences. This pressing situation, capped off by aggressive military leaders calling themselves ‘peacekeepers’, is made worse by The Capitol’s stranglehold. Acting like irritable Republican Party politicians, President Snow and Heavensbee relish in each district’s demise. Like Children of Men and V for Vendetta, the movie ably discusses lower class oppression and rebellion. Despite the obvious symbolism and exposition, we are shown graphic details and vital intricacies. As a symbol, Katniss is depicted as a weakened yet focused role model. With Katniss and Peeta brashly labeled as ‘celebrities’, symbols describing tabloid media, big-budget entertainment, and rehab-hopping A-listers come think and fast. Despite Katniss being adored by President Snow’s young relative, the vengeful leader pushes Katniss, the victors, and Panem’s citizens to breaking point. Each link, illustrating atrocities like slavery, Nazism, and the 99% vs. 1% conflict, is greatly developed. From the opening scenes, District 12 is displayed as a mining town choked by poverty. Thankfully, the startling attention to detail and expansive direction bring the elaborate settings, action set-pieces, and costumes to life. This grimy world, creating a stark contrast between the rich and poor citizens, is elevated by the significant production design. Each district, defined by dirt-covered vistas and cluttered spaces, is chillingly effective. Boosting the debilitating narrative, The Capitol is a remarkable sight. A concoction of Lady Gaga wet dream, Anime, and Paris Fashion Week, The Capitol bursts with bright colours and awe-inspiring cityscapes. Thankfully, the game itself also elevates this action-adventure. Here, the dome is more detailed and engaging than the original’s arena. Ruled over by Heavensbee, the dome is fit with such deadly forces as tidal waves, baboons, and poisonous gasses. Here, the jungle setting allows or several creative and intensifying moments. With force-fields, traps, and competitors around every corner, each action sequence keeps the movie’s tempo going. 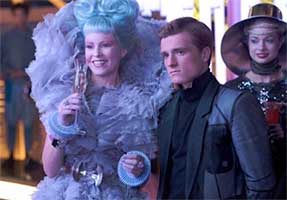 Like with the original, the narrative is made whole by its cast of wondrous and zany characters. Defined by wacky names and aesthetic choices, each character in Catching Fire has something to prove. Many characters return from the original, with strengths and burdens to bare. Unlike the original, Catching Fire illuminates every beloved character. The heavy-handed plot-line, despite the source material’s vagueness and familiarity, is saved by the engaging and sickening character arcs. Defined by each character’s love-lives, losses, deaths, and impulsive actions, this sequel’s consistently dour tone hits hard. Like the Truman Show and Battle Royale, the reality TV-esque premise hurriedly draws characters and audiences in. Here, we are swept up by physical, political, and moral conflicts making for empathetic and definitive characters. This dystopian drama, unlike the Harry Potter series’ final instalments, justifies its startling moodiness and urgency. Also, the young lead characters overshadow the supporting players. Katniss is an efficient and fascinating creation. Unlike many female characters in young adult fiction (guess who I’m referring to), Katniss understands and adapts to the ever-changing world around her. Her unique attributes throw her into each pressing situation. Pushed by President Snow and The Capitol’s alluring hierarchal system, her actions create ripples hitting every important character. Katniss and Peeta’s awkward yet intensifying friendship brings gravitas and poignancy to this gothic material. Their antics, defined by cutesy interactions and revelations, emphasise their traumatic behind-the-scenes experiences. Lawrence, launching into the A-list with the original, takes control of every frame. Lawrence’s endless charisma and charm, blissfully injected into the movie’s most engrossing sequences, help her carry this mega-popular franchise. Thankfully, everyone in Catching Fire‘s starry cast does a commendable job. Hutcherson and Hemsworth bring gravitas to their vital roles. Harrelson, Kravitz, and Banks deliver enlightening performances for our two leads to bounce off of. Sutherland, Hoffman, and Tucci become interesting antagonists. Meanwhile, Jena Malone, Sam Claflin, and Jeffery Wright provide impressive turns as popular Quarter Quell competitors.

Thankfully, this much-anticipated sequel lives up to ridiculous expectations whilst eclipsing the original. Despite young adult fiction’s stranglehold over pop-culture, Catching Fire is a stand out adaptation fit for all family members. This series, now preparing for Mockingjay Parts 1 and 2, is on the right track to continue its baffling success. Surprisingly, this lively, sickening, and pulsating sequel is one of 2013’s best blockbusters.

Verdict: An engaging, impactful, and moody sequel for the holidays.