The Oculus Rift: The Hype and The Facebook Takeover

The media and gaming world has been enthralled by the Oculus Rift, a virtual reality headset that will allow gamers to get a real first-person perspective in their favourite games. Since its duct-taped debut at E3 2012, the developers Oculus VR have raised over $91 million to fund the various prototypes and fix issues with software such as those which caused a worrying motion sickness for users. The hype surrounding the product has been growing exponentially since then, with the release of developer models allowing gaming companies to create headset compatible games in time for the Oculus Rift’s release. On March 25th, 2014 it was announced that Facebook had bought the Oculus VR for $2 billion. What does this mean for the gaming hardware, and why would a social media outlet even want to buy a company specialising in virtual reality headsets?

The Oculus Rift has come a long way since 2012, with help from a Kickstarter campaign in which Oculus VR raised over $2.4 million through fan community donations, far more than their $250,000 target, showing that the demand for the device is massive. However it could be argued that much like the Kinect for Xbox or the Wii balance board, the Oculus Rift provides a novelty gaming experience in that after a while gamers will become bored of wearing the headset and opt for dual monitors or the normal controller gameplay style. The issue with the aforementioned motion controls is the lack of precision: after spending 30 seconds just trying to get the selection tool to appear on the screen via Xbox Kinect, you have to shake your hand violently enough to get Carpal Tunnel Syndrome just to play the game you want. Specifically in first person shooters the motion sense technologies come into difficulty simply because there is no way to get the pin-point accuracy that a sniper rifle provides when using even your fingers. Nintendo attempted to combat this by making casual games such as Wii Play and Wii Sports, which do not rely on accuracy in their gameplay and have a low difficulty to avoid the ‘rage quits’ that befall so many gamers.

Oculus VR have learnt from Kinect and the Wii’s mistakes, endeavouring to create a sensitive, precise and immersive gaming experience that allows you to play all styles of game comfortably. The most recent version of the Oculus Rift uses a low persistence OLED display to eliminate motion blur and judder, the catalyst for simulation sickness. It has a high-definition 960×1080 per-eye display which improves clarity and colour. For the ability to actually move within a game rather than just feel like you’re sitting way too close to a TV screen, the Oculus Rift also uses an external camera and LED reference point on the headset itself, giving players the ability to peek round corners and survey the vast lands of their chosen game’s world. The most recent version also includes updated orientation tracking, a built-in latency tester, an on-headset USB accessory port, new optics, elimination of the infamous control box, a redesigned SDK and further optimized Unity and Unreal Engine 4 integrations. 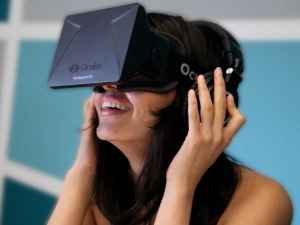 Whilst it seems full steam ahead for the Oculus Rift, an announcement on March 25th, 2014 came as a surprise to followers of the product’s development and made many sceptical about the mission of the company. Via his Facebook page, Mark Zuckerberg announced that Facebook had acquired Oculus for $2 billion. This caused some confusion and worries amongst fans as the Oculus Rift is meant to be a gaming device, not yet another way to connect with Facebook, or in the enraged words of YouTuber Boogie2988’s character Francis, “so I can crush candy in real time?”. In order to diffuse the panic Palmer Luckey, a founder of Oculus VR, posted on the company’s blog to comment on the recent merge:

“When Facebook first approached us about partnering, I was skeptical. As I learned more about the company and its vision and spoke with Mark, the partnership not only made sense, but became the clear and obvious path to delivering virtual reality to everyone. Facebook was founded with the vision of making the world a more connected place. Virtual reality is a medium that allows us to share experiences with others in ways that were never before possible…

In the end, I kept coming back to a question we always ask ourselves every day at Oculus: what’s best for the future of virtual reality? Partnering with Mark and the Facebook team is a unique and powerful opportunity. The partnership accelerates our vision, allows us to execute on some of our most creative ideas and take risks that were otherwise impossible. Most importantly, it means a better Oculus Rift with fewer compromises even faster than we anticipated.”

So it seems there is little damage done by the Facebook takeover, but the merge in still in its early stages and it is unclear how much power Facebook will want to wield due to its financial aid to the developers. There is still a lot of time for developments and issues to arise for the Oculus Rift as the actual device is still a baby only released to game developers for coding purposes. Mark Zuckerburg has taken a huge leap of faith investing in a two-year-old hardware company with a 21-year-old founder that hasn’t released a consumer product ever, but in a community where virtual reality was the stuff of sci-fi films and a laughable subject in the real world the Oculus Rift is the first viable virtual reality device with unforeseeable opportunity.

Posted on Mar 30, 2014 by
Louise Egan
Writing most fervidly about film, animation, comics and games, but you'll get articles on almost anything if it catches my eye. Not afraid to criticise as well as champion.
Edited by Misagh.
Follow