It took me four days to do so, but I have finally played through the story-line of the much-anticipated Tomb Raider reboot. Now it’s probably worth mentioning that I do not play a lot of video games. Much of my time is devoted either to school, work, or movies; however, I made an exception for Tomb Raider because I am a sucker for nostalgia. It’s probably also worth mentioning that I soon discovered the new reboot to be (almost) nothing like its predecessors. Don’t worry, I mean this in a good way.

The old Tomb Raider games were fun… in their time. But let’s face it, they lacked in the story department and compared to today’s cinematic standards, almost embarrassingly so. Being an aspiring filmmaker means that story is important to me, so when I actually sat down to play this game, that’s where I focused a lot of my attention. What I found was only a slightly more developed plot than per usual from these Raider games. Our new adventure begins when we meet up with Lara Croft and company out in the vast Pacific, just off the shores of a mysterious Japanese island. Suddenly, out of nowhere, a ferocious storm sweeps up the U.S.S. Endurance, wrecking her a shore, and leaving her crew stranded and incapacitated.

Lara wakes up after an unspecified amount of time only to be knocked out by an islander and carried away to a God-forsaken cave where she is tied up among piles and piles of disjointed skeletons and rotting corpses (seriously, there are enough defiled corpses in this game to make Schindler’s List blush). Lara’s first task is to break free of her bonds. This is where the gamer takes over in one of the more interesting tutorials in recent memory. Right off the bat Lara is blowing things up, sliding through or jumping over mud-riddled ravines, and barely escaping unstable, collapsing caverns with her life. It’s actually physically impossible not to think of both Indian Jones and Uncharted 2 at some point during this game.

With her new found skill as a survivor, Lara ventures on to locate and eventually rescue the remaining survivors from their captives. Ultimately, Lara’s search-and-rescue mission kicks up some metaphorical dirt surrounding a conspiracy involving undead samurais, a sun goddess, and an on-again-off-again sacrificial service featuring Lara’s horribly developed child-like friend, Sam. This is where the story begins to fall apart.

Lara is so well developed that she makes all the supporting characters seem almost one-dimensional. After her supporting crew gets about one journal entry per person, Lara gets ten over the course of the game and is even capable of internalizing thoughts about each of the supporting characters. Sam, however, only seems to exist as an inconvenient plot segway by getting herself captured by the same people over and over again. Sam doesn’t help fend off samurai zombies or help put together the escape boat like the others do. No, she just gets captured and thus thrusts Lara into one tedious search-and-rescue mission after another. Had the writers been more bold, there could have been more interesting ways to move the story along. 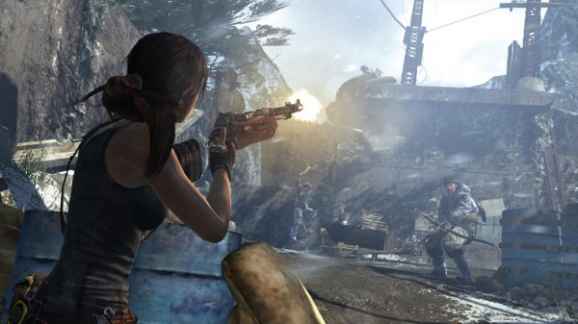 Fortunately, story has never been the draw to these tomb raiding games. Even before Uncharted was a thing, players wanted to explore mysterious, tropical islands and uncover ancient artifacts while having fun doing it. This is where 2013 Lara Croft shines brightest. In a contemporary world where Arkham City is hailed as one of the greatest video games, Tomb Raider has adapted a similar game play in order to maintain relevance (and it only makes sense, seeing is how Rocksteady’s Batman games come from a sister company). Like the Arkham games, Tomb Raider has adopted the concept of weapon modification. Lara can now up her arsenal in order to keep up with the growing difficulty of obstacles as the game progresses. This growing difficulty also helps to maintain interest for the player; nothing is ever boring (even if the A.I. bad guys can chuck sticks of dynamite at you from practically any distance and not miss).

In another concept adopted from Rocksteady’s games, Lara now has Survival Instincts. Press the appropriate button and Lara can sense nearby animals or henchmen, both of which can be killed to gain XP in order to advance your survival techniques. These Survival Instincts can also be upgraded themselves later in the game. This will help Lara detect any secret artifacts that you may have missed during your first outing (thank goodness for fast travel!). As I mentioned earlier, all of these borrowed techniques help the new Tomb Raider stay fresh during multiple play-throughs and help it to feel more at home among its equally-thrilling competitors.

Speaking of which, there have been a lot of comparisons made between Lara Croft’s latest outing and those other action-packed thrillers of recent memory, namely the Arkham and Uncharted games, both of which I’ve mentioned in this review. They all share a lot of similar qualities, including similar game-play mechanics and beautiful art design. However, there is a major gender difference between heroes.

It’s no secret that Lara Croft is one of, if not, the most over-sexualized video game character of all time. There is even a legend that Lara obtained her over-endowed bosom after a male developer accidentally slid the character enhancement bar all the way over and another horny male developer told him to leave it there. Twenty years later, Lara has gone from a physically impossible chest to a physically-possible-but-still-unreasonably-large-for-her-line-of-work, adventurer’s chest. Not only do her boobs look like they could never fit between a narrow chasm under the Earth, but while literally everyone else in the game is wearing either a jacket, sweater, or leather-bound, animal skin suit, Lara is the only one in a tight tank top. Sure, it looks warm on the island, but we know there is no logical reason for this to be the case. To make things worse, there is more than a handful of lower shots looking up at her ass as she climbs rusty, half-unhinged latters and higher shots looking down at her cleavage as she tumbles around on the ground.

As if Tomb Raider being a showcase for the female lead’s body was not degrading enough, the sexual stereotyping gets even worse. Back in the old Tomb Raider games, Lara was almost always on her own. When she got into trouble, it was only herself she relied on. In this reboot, there is almost always a man there to rescue her. So, in ways, Lara has been even more sexualized in the 21st century than she was, which proves that we as a society are not yet ready to take a female lead in an action game (or movie for that matter) seriously.

Despite the illusion of a more “fair” treatment of one of video games most iconic female leads, there is honestly a good game here and there is plenty of fun to be had. From the single-player story that engages the player in a plethora of logic-based puzzles, free-roam experience baiting, and intense action sequences to a pretty decent online multiplayer that pits players against each other in a variety of different gaming styles for experience and rankings, Tomb Raider is a fitting origin story that could very well be the base of a profitable and solidly entertaining franchise. Welcome back, Lara.

Posted on Mar 13, 2013 by
Jordan David
Born and raised in the Great Lakes State of Michigan. I work as a projectionist at the local movie theater and study film/ video at Grand Valley State University.
Follow

Games as Art: Displacement within the Art Gallery
Assassin’s Creed and Feminine Freedom
How Arcane Changed the Game
Horizon Zero Dawn and the End of the/our World
Mario, Link, and Scott Pilgrim: Relationships in Video Games
Casual Violence in the Borderlands Franchise
The Rise and Fall of Zynga Facebook Games