The Relationship Between 3D Technology and a Film’s Success

3D technology has seen another surge in demand. But is the boom in 3D movies any different from the previous trends? During the 1950’s – also known as the golden era for 3D movies – the plastigram system was used. This involved a method called anaglyph, where two images are photographed and projected on the same strip of film through different color filters, one red and one green. When the eye looks through the corresponding colors in the viewer, the images separates, creating a 3 dimensional effect. This was a very difficult technique to use, however the technology was not available at the time for an improved system. The first surge in 3D productions was caused by the success of Arch Oboler’s Bwana Devil, the “Lion in your lap” 3D blockbuster. The major studios took note of its success and rushed their own 3D films into production, many of which were similar horror/monster movies.

Jack Arnold’s Creature from the Black Lagoon was released in 1954, which was the baby boom period after World War II. The increase in birth rate provided the film producers with a largely teenage market, easily enticed by the “It comes off the screen right at you!” advertisements. Teens with money burning holes in their pockets loved 3D B-movies like Creature from the Black Lagoon for the cheap thrills they provided. Like when actress Julie Adams is on the boat wearing an elegantly alluring, flowery swim suit when she is swept off her feet by the 3D Creature. It was a text-book example of a monster movie. But the 3D gimmick gave cinema audiences an ‘alien’ experience that genuinely caused fright and was responsible for a large majority of tickets sold due to its fresh spectacle, helping it become a monster movie to be remembered.

After the 1950’s 3D craze fizzled out – mainly due to the increased labor required for 3D at the time – it reawakened in the early 1980’s when the exploitation picture Jaws 3-D briefly piqued the curiosity of young audiences. Joe Alves shot the film using the arrivision 3D system. This involved using a special twin lens adapter fitted to the camera, which divided the 35 mm film frame in half along the middle. The upper half recorded footage for the left eye, and the bottom half for the right eye. This period of films had no real overwhelming success in the three-dimensional regions. It was an echo of the 1950’s period, using 3D as a gimmick to boost the number of ticket sales. Cinema-goers became more conscious that productions were capitalizing on a craze and the once revolutionary spectacle became annoying and lost its novelty. However in 1983 the only way to get audiences back in to cinemas to see another Jaws sequel was to shoot it in 3D. Not only was the film overly soft – showing poor focus – it also resulted in a rather flat looking picture image that constantly suffered from image bleeding/blurring with many object edges becoming a hazy blue or red. Arguably one of the worst displays of 3D technology became a great success in terms of box office earnings, making an impressive $87,987,055 from a $20,500,000 budget, thanks to the 3D fad.

Different techniques used to produce a 3D effect generate different outcomes and affect how a film is received. A good example being, debatably the most successful 3D film, James Cameron’s Avatar – released in the third and current boom of 3D films, where the demand is as grand as ever. Unlike the previous stints of 3D films, older generations are more tolerant of the technology. The attitude toward 3D during anticipation of a film is mainly positive, enhancing the sense of event and special occasion, particularly when in association with IMAX screenings and this was definitely the case with Avatar. When Avatar was released, the ratio of 3D to 2D attendance was 90:10, with the 10% possibly equating to a large percentage of the population that are unable to watch 3D cinema for medical reasons. Considering that a 3D cinema ticket price can be raised by 40%, costing on average $3 more than a 2D screening, this sales ratio spawned extremely large revenue for Avatar that overwhelmingly outweighed the hefty budget of $237,000,000. It achieved just over $1,000,000,000 worldwide in only 17 days, the fifth movie in history ever to hit $1 billion, let alone in 17 days. But, not only is it the most successful 3D film in terms of profit, it is one of the most prestigious 3D films of all time. 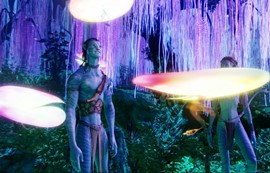 Avatar was shot using a fusion camera system, where two camera lenses are about as far apart from each other as the average pair of human eyes, recording two separate images for each eye. Cameron’s 3D sci-fi epic represented a dramatic leap in film technology. He paints in bold colors, using his 3D cameras to create a universe of almost overwhelming vibrancy, producing a cinematic experience to be remembered. A great example of this is how Cameron utilized darkness, by creating a mini dragon-like creature (commonly referred to as a Fan Lizard) that when provoked, takes flight using its illuminated, rotating wing, almost hovering in the hands of the audience. After watching the film, journalist Nick Curtis wrote “You’ll never want to watch 2D again.” This is just one of the many outstanding reviews the film received, making Avatar one of the rare examples of how 3D technology can not only greatly improve a film’s success in earnings, but also in critical reception.

A contrast to James Cameron’s successful use of 3D technology is Louis Leterrier’s Clash of the Titans. Once the producers of Clash of the Titans saw the box office numbers from Avatar, they quickly converted their movie into 3D during its post-production. The resulting film was an utter disgrace in terms of three-dimensional qualities. Most of the monsters looked shabby after being post-processed into a 3D mess. Unlike Avatar where the film was shot and engineered in 3D, Clash of the Titans appeared in 3D only as a last-minute, careless money grab. The effects were hardly noticeable, except as what can only be described as a 3D haze, turning the foreground in to a series of cardboard cut-outs and the background in to a vague, amateur-play backdrop. The movie was entirely watchable without the glasses as its 3D effects were so slight… and I paid considerably extra for a 3D ticket!

Even though Clash of the Titans was a 3D disaster, it still came 11th in the top grossing films of 2010 making $493,214,993 and selling 10,811,687 3D tickets. Thus numerous other films such as Michel Gondry’s The Green Hornet were converted in a similar fashion. 3D technology can be extremely lucrative for big productions, because there will always be passive film watchers that want to see giant mythical titans in what is promised as ‘3D’.

On rare occasions, like in Martin Scorsese’ 3D feature Hugo, the technology can be used as a narrative device. Scorsese planned to make Hugo a 3D spectacle that immersed the audience. He was quoted saying “3D takes movies into the future by looking back to the origin of cinema and beyond, to sculpture and do justice to the world by rendering it in motion and in three dimensions… That’s why I’m working in 3D.” Hugo was shot in 3D in a similar fashion to Avatar, using a fusion camera system, which helped Scorsese apply 3D as a storytelling device to add depth and intensity. One exceptional example is in the scene where Sacha Baron Cohen leans further and further out towards the audience in a close-up shot, so that he intimidates the viewers, as well as little Asa Butterfield. It’s extremely effective, and a really innovative way of using 3D to immerse the audience in the film without relying on cheap tricks. Also, the presence of spewing steam is another technique Scorsese used to harness the 3D technology and bathe the audience in the ambiance of the clock tower.

Hugo grossed $115,814,000, an unjust figure compared to the $493,214,993 that Clash of the Titans grossed. Audiences appreciated the transition from Hollywood’s 3D dross, to Scorsese’s innovative 3D creation but the demand for creatures whaling their tentacles around and souring through the air in 3D is too great for a sleek and classy 3D film such as Hugo to match their box office takings. Yet Hugo has still prospered in the minds of film enthusiasts and will smolder in the history books for its reinvention of 3D. The capability for the technology to improve a film’s success is clear and with certain directors pushing the boundaries of 3D as a narrative device, the technology has proven to be more than just a gimmick to generate revenue. However this will always be juxtaposed by films that use 3D technology purely to boost success at the box office and not as an art form, because let’s face it… 3D pays.

Posted on Apr 8, 2014 by
Luke Martin
Luke Martin is soon to be a journalism undergraduate, with a passion for the arts.
Edited by Jordan, Misagh, Nilson Thomas Carroll.
Follow