The upcoming Playstation 3 title Beyond: Two Souls is developer’s Quantic Dream’s “most ambitious title”, offering “grand, dramatic gestures rather than quiet, undemonstrative emotion”. Like many other titles (see: The Last of Us and Bioshock: Infinite), it promises to push the boundaries of narratives and story in videogames, creating human, lifelike drama in a simulated and digital space.

However, this is not necessarily a good thing. Gameplay footage suggests that story and narrative is placed at the very forefront at the game; the acting, the direction and all of the scenery conveys senses of hopelessness, drama and struggle. Yet once you look beyond that, the very core of the game itself mainly consists of simple QTEs (quick time events). It ultimately conveys that the gameplay and how it plays has been shunned by the developers in order to focus on the narrative and the ‘cinematic’ feel of the game.

This may be quite controversial, but I have to state it: games do not (and should not) have to be engrossing on a narrative level. The narrative is always tertiary when playing a game. Maybe even secondary. 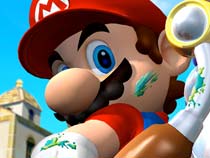 When playing a game, most (if not all) of the experience is derived from how it plays. For example, in Super Mario Bros., the ‘story’ (if one can call it that) is irrelevant. The only thing a player needs to know is that they should avoid pitfalls, fireballs and other dangers. The ‘drama’ of Peach’s kidnapping is never there; the only ‘drama’ present in Super Mario Bros. is the ‘drama’ that the player creates by themselves through the gameplay mechanics. The inherent quality of a game (the gameplay) is pushed to the very front of the title, and all of the experience is accrued through that. When the player reaches the end of the game, the satisfaction is not derived from a heartwarming scene involving Princess Peach and Mario; it is derived from the fact that the player and only the player has overcome every single obstacle in front of him and has finished the game. Princess Peach, therefore, is not a character. Neither are Mario or Bowser. They are merely manifestations of the relationship that the player shares with the game in front of him: Mario is the avatar of the player, Bowser is the obstacle and the challenge that the game presents to the player, and Princess Peach is the symbol of ultimate satisfaction that the game rewards to the player after they have completed the game.

If Super Mario Bros. was a tense psychological thriller with a focus on Mario’s inability to protect the Princess from an inhuman evil instead, the experience of the game would ultimately be lessened. The game not would be between the player and the game; a narrative would be forced down the throat of the player and the experience that the player gains from completing the game would be cheapened. The sole advantage that a game has over other mediums of entertainment is the interactivity: the gameplay. To abandon all that in the face of simple narratives and forced scenes of drama lessens the value a game has; all of the drama, all of the excitement, all of the emotion must come from the mechanics itself, never from the context around it.

Consumers have also grown tired of the growing trend of ‘cinematic experiences’. Compare Capcom’s self-developed Devil May Cry 4 with Ninja Theory’s DmC: Devil May Cry. DMC 4 has a bare-bones and forgettable plot that only exists to push the player from one section of the game to the other. The gameplay, however, is incredibly deep and intricate, with one of the highest skill-ceilings in modern gaming. DmC, on the other hand, had an emphasis on the narrative and the story, shunning many gameplay mechanics introduced in the previous titles.

Yet consumers did not appreciate the changes. The newest hack n’ slash, lauded by many critics as a ‘refreshing change’, absolutely bombed in sales, selling only 0.24 million copies worldwide on the Xbox 360. DMC4, on the other hand (the game that needed ‘revitalisation’ and ‘refreshment’) sold nicely, reaching 1.29 million.

Quality of the games aside, it is only clear that consumers voted with their wallets. It indicates a necessity for videogames to go back to basics, becoming less ‘dynamic’ and ‘engaging’ and more ‘fun’ and focused solely on ‘gameplay’. The bubble is bursting, and consumers want something different. It suggests a reluctance to accept the watering down of gameplay mechanics in favour of ‘cinematic’ and movie-like experiences.

Even large-name developers have lost patience with the AAA gaming industry’s focus on the ‘cinematic experience’. Masahiro Sakurai, creator of Kid Icarus: Uprising, the Super Smash Bros. series and the Kirby series has expressed concerns over certain titles’ emphasis on narrative. He considers the story as never something that should take precedence over the gameplay, as the game ends up “having their tempo all messed up as a result”. He argues that “that balance is key” in deciding on narratives. Quite rightly so, as developers have proven time and time again that a great balance between game mechanics and game narratives can exist.

The future is, as always, quite uncertain in the world of videogames. Although consumers have proven that they dislike the sacrificing of game mechanics in order to favour narrative, Microsoft’s upcoming Xbox One console suggests that the lines between videogame and ‘cinematic experience’ are continuing to be blurred. Furthermore, Beyond: Two Souls is a very large scale release; its ultimate success, however, is still in question. Quality discussions aside, whether it will be a commercial success or not is, as always, down to the consumer.

Posted on Jun 5, 2013 by
Nathan Walters
Welsh man that likes literature, videogames and a whole bunch of other cool stuff.
Follow