Comics Without Superheroes: The Literary Value of Graphic Novels

When people think about comics, chances are that they envision colorful superheroes flying over the city and through space fighting aliens, gods, and other super baddies. And who can blame them? Superhero movies currently dominate the box office, television shows based on or around comics and comics culture are emerging as ratings powerhouses, and the San Diego Comic Con has become a huge pop culture phenomenon encompassing more than just comics. But comics are more than superheroes and aliens. Comics have become a literary medium, which, as Hilary Chute explains, allows them to be “what novels used to be—an accessible, vernacular form with mass appeal”. The graphic novel has even entered the halls of academia, becoming source material for literary studies. The combination of images and narrative are a highly accessible and engaging form of storytelling. This allows for comics to tell more than just fantastical stories about heroes, but breach political subjects, tell a personal narrative, or just be a solid piece of literature. 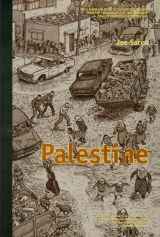 In 1993, writer/illustrator Joe Sacco began publishing his 9-issue comics series Palestine, later reprinted in trade paperback in 2001. In this work, Sacco explores the tensions between the Israelis and Palestinians—but he does so by focusing on the Palestinian perspective, specifically those living in the Occupied Territories. Through the use of comic form, Sacco presents a journalistic exploration that reveals information not readily distributed by mainstream American media.

The revelations come early on when Sacco depicts his interview of a Palestinian man he meets in Nablus. This man points out to Sacco several specific individuals that he knows who have lost fathers and sons to imprisonment or death resulting from conflicts between the Israelis and Palestinians, though context for these conflicts is not given. However, other interviews with Palestinian people reveal that their homes are destroyed—literally bulldozed to the ground by the Israeli military, olive groves used for agricultural purposes are destroyed for little or no reason leaving people with no means to support themselves or their families, and the people affected feel that there is nothing that can be done; they can’t stop the Israelis and the Palestinian government gives them little or no support and protection. 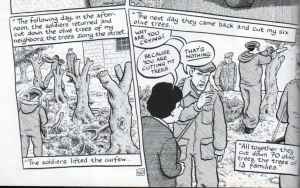 What is most effective about Palestine is the approach that Sacco takes in presenting his story. Blame is not placed on either side; fingers are not pointed. Instead Sacco gives faces and voices to those affected by the conflict between Israel and Palestine. He humanizes suffering and reveals the true effects of the conflict, the human effects. Also, the illustrative representations of the people in the story add to the weight the story carries. The cartoon-like representations help the reader to sympathize with the victims in the story. The simple caricatures don’t perfectly represent the real people that they are based on, and instead can just as easily represent someone’s neighbor down the street, a co-worker, or a classmate. 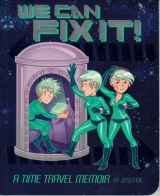 Jess Fink also puts a face to suffering in her bio-comic We Can Fix It. In her work, Fink explores her past by going back in time and attempting to help younger versions of herself make better decisions. The premise is a bit ridiculous (as is the character of Jess, clad in a shiny, curve hugging body suit hopping through time in a machine that looks like something from early cinematic science-fiction) but effective.

The adventure begins harmlessly enough, with Jess initially attempting to teach past versions of herself how to strengthen her sexual performances in her teen years. The stylized cartoon illustrations and blunt humor make the subject matter more entertaining than off-putting for the reader, such as when Jess becomes intimate with her past self. 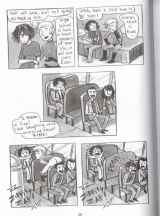 The humor also blunts for the reader the sharp edge of personal trauma that follows as Jess’s adventure continues. Jess revisits points in her past where she was teased by classmates and made to feel like an outsider after changing schools in her early teens, to which many can no doubt relate. The major point of trauma in Jess’s past is revealed in the instance where her father kidnaps her from school. As Jess attempts to help her past selves to make better choices, or at least different choices to repair or avoid shame and embarrassment, she realizes that even after going back through time, having gone through these experiences again, she still does not know what she is doing and is unable to effect the changes that she wishes to.

The turning point for Jess comes when she gets advice from her own future self. Jess’s future self points out that she can’t repair the past, not matter how much she wants to, and that it’s not only the bad times but the good times as well that make people who they are; that make Jess who she is. Jess takes this to heart and travels back to relive some of her best memories. This brings closure to Jess as well as a sense of satisfaction, because even though she couldn’t fix her past mistakes she realized that her mistakes didn’t need to be fixed. 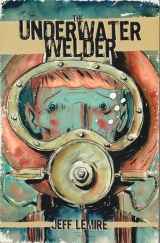 Closure is also something that the main character in Jeff Lemire’s The Underwater Welder desperately needs. This dark, depressing, and superbly presented story follows Jack Joseph, a welder for an oilrig off the coast of a sleepy New England town, in the days leading up to the birth of his son and the anniversary of his father’s death. The confluence of these two events thrusts a tremendous amount of emotional stress upon Jack, causing him to have a psychological breakdown that forces him to confront suppressed memories from his childhood. What follows nearly costs Jack his life, while at the same time giving him a chance to create a happy life for himself and his family.

Lemire’s art is both stunning and frightening. The monochromatic illustrations give the piece the feel of, as Damon Lindelof describes in the introduction to the story, “the most spectacular episode of The Twilight Zone never produced.” Nearly all of the events in the story take place at night, or underwater, isolating Jack from the outside world, mimicking the emptiness that he feels inside. And for a portion of the story, Jack exists only to himself, creating a frightful loneliness for both Jack and the reader. 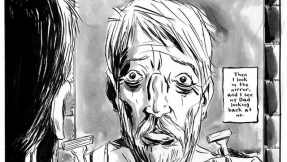 The stylized and graphic depictions of the characters also speak to the isolation of Jack. The other characters in the story are more animated and expressive than Jack is. When it comes to Jack, however, his lack of expression, and deep, hollow eyes reflect the fear and loneliness he is experiencing. He comes across to the reader as a man standing on the precipice of nothingness and there is nothing we can do but watch him fall.

And fall he does when he finds an old pocket watch under the water at the oilrig. The watch triggers memories of the days leading up to his father’s death, but Jack feels there is something more to the watch. He obsesses over the watch and his father. Jack goes so far as to dive alone, at night, to try to find the watch again. During the dive Jack has what can be best described as an out-of-body experience that exposes Jack’s dark truth: in a fit of anger, Jack threw a pocket watch that his father gave him into the bay. Jack’s father died trying to recover it on Halloween. It becomes clear that subconsciously Jack hides this particular memory by creating for himself an image of his father as a hero, an adventurous man who could do no wrong. However, the flashbacks that Jack experiences and the memories that resurface pull back the layers that Jack has wrapped around his father and expose the deeply flawed man that Jack’s father was. 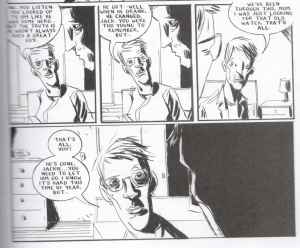 The realization of the affects of his actions simultaneously brings Jack farther into the darkness and guides him to toward the light. Jack realizes “now I’m the one who’s missing” and that “maybe I can still change things . . . Maybe I don’t have to be a ghost too.” This revelation gives Jack the ability to find closure with his father’s death and to return home to be a father to his new son instead of a ghost. 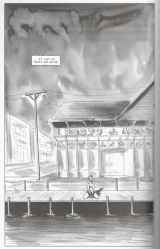 The combination of written text and illustration that makes up comics engages the reader both visually and aurally, allowing reader to both see and create the voices of the characters in the story that is being told. This helps to immerse the reader completely into the world being presented to them, creating a more impactful story, and connecting with the reader on a deeper level than most traditional forms of storytelling. Comics now are what theater and traditional literature were and still are: an accessible form of entertainment that can convey simple stories for the sake of entertainment, or can present topics with deeper meaning and purpose.