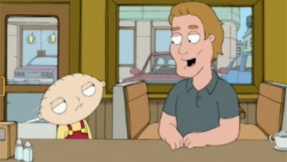 There was once a time when Matthew McConaughey was a bit of a joke. Well, not a joke as such, more of a punch-line. He was just, to paraphrase an extended Family Guy cutaway on the subject of how much Matthew McConaughey sucks, “a guy with a great ass and tight abs used to provide some down-home enthusiasm,” who was more noted for taking his shirt off and being good-naturedly charming in a series of terrible, terrible films than being, you know… an actor. The weird thing is, though, that, without anyone really noticing it happening, he slowly pulled “an Affleck” and went, in a few short years, from the king of the paper-thin rom-com to a pretty respectable actor in a string of critically and commercially successful films. So, how exactly did Matthew McConaughey prove that he was more than just a torso?

Looking back at his early career, however, this shift towards serious, high-quality work is not without precedent. His breakout role came in Richard Linklater’s seminal 1993 stoner film Dazed and Confused, which is only just shy of being a classic. McConaughey set the blue-print for his later movie persona in that film as David Wooderson, a drawling southern charmer, who, if he was any more laid back, would be lying down. He also got to utter the immortal line “that’s what I like about these high school girls; I get older, they stay the same age.” 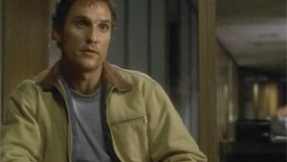 This was followed by a steady stream of films, some bad and some good, which suggested that a promising career lay ahead of him. These included the decent civil rights drama A Time to Kill and the historical slavery film Amistad, both of which featured him as compassionate lawyers fighting against racial intolerance. Best of the lot, in my opinion, was 2001’s Frailty. Frailty, directed by Bill Paxton (or is it Pullman?), tells the tale of a man plagued by angelic visions which instruct him to rid the world of demons, leading him to involve his sons in a killing spree. McConaughey does not have a substantial part, but an important and memorable one which he performs ably. To digress, Frailty’s a compelling and disturbing film, and I urge everyone to watch it.

Yes, okay, there were some stinkers (Contact, anyone?), but the upshot of all of this is that, prior to 2001, Matthew McConaughey was looking to be a good actor in the making. He had a couple of substantial roles in good films under his belt. Then, for reasons known only to him, he only started accepting terrible roles in bad rom-coms (or, in the case of Sahara, bad adventure films). It’s difficult to say what happened for certain, maybe he got into lots of debt to some bad people, maybe he spent a few weeks in the wilderness and his spirit animal told him that the path to happiness was paved with popcorn movies, maybe all the good directors, not wanting to see him naked and playing the bongos, decided to hire other actors instead. I don’t know, all I know is that between 2001 and 2011, he made an almost unbroken string of terrible films.

Even films which should, by all rights, have turned out okay ended up being turkeys. Sahara was so bad it gave me acid reflux. I don’t know how good the source novel is, but it must have been better than Sahara turned out, else we would have seen Nazi-esque burnings of Clive Cussler books all around the globe… or it simply wouldn’t have been published. Either way, it sucked so profoundly that the original author actually sued the movie studio, and it ended up being such a terrible disappointment that not even McConaughey’s seemingly bullet-proof southern charms could save from box office oblivion. Weirdly, though, it wasn’t even his worst film from that decade. Not by a long shot. 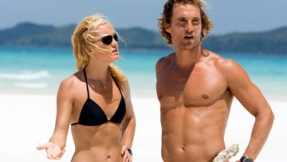 The list of terrible films is almost enough to make you wonder how on earth he kept getting work. He was like the M Night Shyamalan of actors. Everything he touched ended up awful. Okay, to be fair most of them started off that way, but then why did he choose them? Why would anyone in their right mind opt to make the film Fool’s Gold. I watched Fool’s Gold simply so I could say I had watched it for the sake of this article, and sweet merciful Jesus is it terrible. If you don’t get the point I’m trying to make about pre Lincoln Lawyer McConaughey, then watch Fool’s Gold. My own experience can be likened to drinking ipecac (look it up), knowing exactly what will happen beforehand, simply so you can say you’ve done it.

I was considering wading through all of them, but I settled for having seen Fool’s Gold, How to Lose a Guy in 10 Days, and the first twenty minutes of Failure to Launch. I simply didn’t have the constitution for the rest. Maybe I can’t be said to have given his films their due. Maybe I’d like Surfer, Dude if I watched it, maybe the rest of Failure to Launch is a masterpiece of well-crafted pathos. I suspect, however, that my assessment is correct, and that Mr McConaughey’s work between the years 2001 and 2011 are, with the exception of Tropic Thunder, the worst string of films ever made by any bankable Hollywood star ever.

Then, as if by magic, there came another about-turn. After 2009’s typically terrible Ghosts of Girlfriends Past, the title of which should perturb any right thinking person, he took a two year break from making movies. I can only assume that he used this time to go on another vision quest with his spirit animal, or meditate high in the Himalayas on the current state of his career, which led him to the conclusion that something had to be done. The outcome of this was that 2011 saw the miraculous, Lazarus-esque resurrection of Matthew McConaughey as a respectable actor. 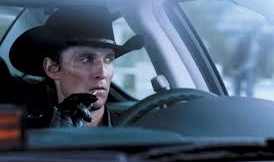 The first film of his comeback was The Lincoln Lawyer, which was, by most accounts, a pretty good legal thriller. Then he teamed up with Richard Linklater again for Bernie, a charmingly odd black comedy starring Jack Black as an eccentric, but popular, mortician Bernie Tiede, who is currently serving time for the murder of his elderly benefactor/friend in 1996. This was followed up by the film that, in my view, put him squarely back on the map, Killer Joe. McConaughey was perfect as the sleazy, amoral titular hitman in William Friedkin’s batshit mental adaptation of Tracy Letts’ play.

That’s a pretty good year for anyone, let alone someone whose previous track record could be described as, at best, mediocre. He followed 2011 up with, unsurprisingly, 2012, where he gained rave reviews and some (minor) Oscar buzz for his performance as king of the strippers in Magic Mike. Also technically from 2012 is Mud, which was screened at festivals that year, but only received general release in 2013. Mud, Jeff Nichols’ follow up to 2011’s brilliant Take Shelter, has received very positive reviews, with particular notice going to McConaughey’s “strong performance… in the title role.”[1]

So, it seems like Matthew McConaughey, contrary to the image he projected for the better part of a decade, is capable of doing more than just taking his shirt off. This recent turn around has been little short of stunning, only surpassed in terms of sheer unlikeliness by Ben Affleck’s transformation from that guy who was in Daredevil to properly good director, or Heath Ledger going from teen idol to Ennis del Mar. I grew up in the thousands and only remember McConaughey prior to The Lincoln Lawyer as that shit actor who never wore a shirt, so to now find myself rating him as among the best actors currently working in Hollywood is pretty surprising. At the very least, him going in two years from perennial romantic lead to the sleazeball who made Geena Gershon fellate a piece of fried chicken is pretty astonishing.

With premier films like The Wolf of Wall Street and The Dallas Buyer’s Club coming up, he seems likely to keep up this run of form for at least a couple more years too. At the moment he is still very much rebuilding his reputation, but if he carries on like this, we could be looking at a damn fine actor in the making. If nothing else, he has at least proven to his critics, myself included, that he is indeed an accomplished and compelling screen presence, capable of giving strong performances in acclaimed films. In short, Matthew McConaughey has proven himself to be more than just a torso.

Posted on Jun 28, 2013 by
Christopher Dibsdall
I'm a law graduate with no interest in the law, but a deep and lifelong passion for film, music, TV and video games... but mostly film.
Follow