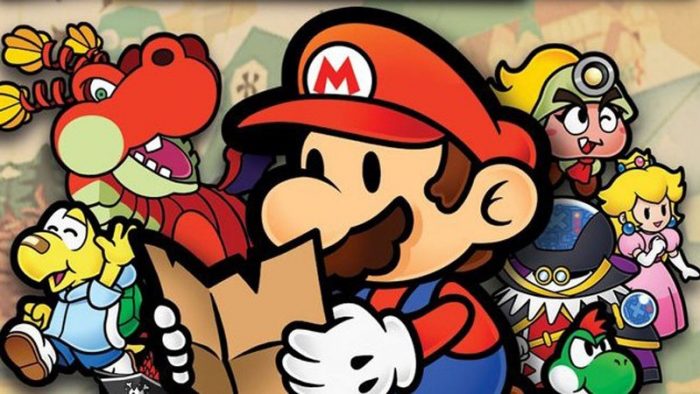 So, let’s talk about Vivian.

In an effort to create an engaging story-based adventure game with Mario on the Nintendo 64’s limited graphical abilities, Paper Mario was a brilliant piece of work. A turn-based RPG using series staples of a cast of varying supporting characters against progressively difficult villains amidst a vast and involving landscape, it started off yet another franchise for the Mario juggernaut. Its sequel, Thousand Year Door, has been hailed as the best of the series, and for good reason – it introduced new gameplay mechanics that were an evolution of the previous iteration, with remarkable (yet not jarring) fourth wall breaking, multiple ways of approaching the same battles, and we got to watch Princess Peach send email to the GameBoy Advance SP in a forgivable moment of product placement.

Amidst the characters, there is one in particular I’d like to discuss, who is introduced (spoilers for a 14 year old game) initially as part of the set of apparently generic villains called the Shadow Sirens. She’s brought in as the strangely excessively bullied sister, and is reasonably swiftly defeated (provided you remember to knock out Beldam’s buffs early enough). Roughly halfway through the game, you discover Twilight Town, an excessively depressing place where the sun never shines, which reminds me of an ancient English saying. To add insult to injury for the town’s long-suffering inhabitants, they are randomly being turned into pigs by a mischievous ghost up in Creepy Steeple. You don’t know the creature’s name, but fortunately he seems vulnerable to standard attacks, and the entire level seems to be wrapped up, up until you realise that the ghostly shadow lying on the floor at the end of the level is not the monster, but in fact – uh, you.

Then begins a truly disturbing part of the game, where Mario’s sprite is replaced with a purple shadow, and no one seems to recognise him. There is another confrontation with the creature – who, it turns out, has stolen your identity, as well as your image. The spell will only be broken if the creature’s name is revealed – which, it can not. For the first time in the game, Mario is completely alone – having lost all of his friends, powerless against a new enemy, and with the entire world having forgotten him.

It is then that you see Vivian again. Distraught at having lost a weapon that she was entrusted with by her evil sisters, you decide to help her, and explain to her the situation. She decides to join you at that stage of the game, and is your sole companion. 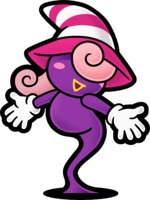 She is also, by the way, transgender.

In the original Japanese iteration of the game, Vivian is written as a transgender individual – Goombella’s “Tattle” skill, which lists enemy descriptions, had

ホントは オトコのコ
(“One of the shadow group, Vivian appears to be a girl but is really a boy.”)

In fact, looking back at the writing, it now makes sense why she’s so horribly bullied. When she first arrives, she proudly describes her group as the shadow sisters, and is immediately beat down by Beldam, her not terribly tolerant big sister.

When the game was translated to English, for purposes of localisation and classificatory codes Vivian’s transgender status was lost. This is a real shame, but knowing this makes what comes next in the game so much more significant.

Mario and Vivian make their way back up to Creepy Steeple, to discover the villain (whose name is revealed as Doopliss), completely unrepentant. But then there are two more shocks – all of your supporting crew, friends previously made in the game up till that point, have all banded behind Doopliss whom they believe to be Mario. It is then that Vivian realises the truth about who you are – and immediately abandons you. Alone, you face all of your friends, as well as a being that has all of your skills. You wage a losing battle against your own former companions, and things rapidly turn south.

And then Vivian returns, with

“I’m sorry, Sis, but this Mario is the only person who’s ever been kind to me.”

It doesn’t matter to Vivian about Mario’s identity – all that she responds to is his act of kindness, and the realisation of who she wishes to follow. This continues to the end, where Vivian is always shown to be vulnerable, but steadfast in only one issue – her loyalty to Mario.

As a species, we still have a large amount of difficulty with transgender individuals. Gender dysphoria is listed in the DSM (Diagnostic Statistical Manual, a reference guide published by the American Psychiatric Association for research and clinical use) as a mental illness, and for good reason, as distress regarding one’s gender identity is a real phenomenon. However, this does not invalidate the identity itself – regrettably, the diagnosis has been used as a tool to argue against transgender identity altogether, claiming that the notion of nonbinary gender identities itself is pathological. Transgender individuals still suffer from ridiculously high rates of suicide – the majority of studies cite a suicide rate of about 40%. That is, if you are born transgender, you have a 40% chance of attempting suicide. This statistic, by the way, is steadily improving.

Your family is supposed to be your primary source of support – yet, when it comes to issues of gender, it is not always true that this can be expected, for various reasons. Transgender individuals cite dissatisfaction not just with their own bodies, but also with society’s perception of themselves – not just society at large, but friends, family, even intimate partners. We still don’t have a concept of what transgender beauty looks like that can be generally accepted.

Which is why a creation like Vivian is so striking. In a game that appears simplistic and 2-dimensional (it is called Paper Mario, after all), Vivian’s arc comes to a peak during a level preoccupied with desolation and identity destruction. Every character believes that everything about themselves is about to be destroyed at any moment, and a malevolent force is wiping them out. Vivian has known nothing but bullying and disconnection her whole life – she does everything her sisters tell her to, because she knows nothing else about who she could be, save the one thing that she knows for sure – that she is female. This sole issue is what drives her disconnection from everyone, but it’s what she can not abandon, because it is who she is.

That’s probably why she is so keen to support a nameless stranger who arrives with a strange tale of stolen identity. It’s suggested in the game that this is the first time she has ever experienced kindness – and, in so doing, is able to identify who she wishes to be. It is not a decision she takes lightly to abandon her family – but, once made, it’s a decision she never backs down on, despite her vulnerability. And it does not matter who this person looks like, or what his name is – what matters to her is the presence of kindness, which elicits kindness from herself, and a steadfast devotion to same.

Posted on Jun 19, 2018 by
Psiwrite
Contributing writer for The Artifice.
Edited by JamesBKelley, Misagh.
Follow