The Significance of Tina to Bob’s Burgers

Tina may not be your favorite character on Bob’s Burgers –her sister, the fun and unpredictable Louise is quite popular, as is their cheerful mother, Linda. However, I would argue that Tina, more than the others, is imperative to Bob’s Burgers in making it the successful animated series it is today. In many ways, her character embodies all the wonderful qualities about the show and perhaps even more importantly, Tina exists as a significant female character within the entire television landscape.

Though many smart, well-written animated series exist on television, Fox’s Bob’s Burgers is in a category all of its own. Shows such as Archer, South Park, and The Simpsons are all funny, witty and enjoyable, yet they lack a certain something Bob’s Burgers brings to the table –warmth, and a family unit that thrives on mutual love for one another. This is not to say that the families within the aforementioned shows, or others such as Family Guy or American Dad, do not love each other, but it is not often expressed in a heartfelt manner. Instead, these shows focus on sharp, crude remarks, a tactic that fosters humor yet casual cruelty.

Bob’s Burgers is different –it’s heartwarming, and the family dynamic is both nuanced and realistic without losing any of the humor. Bob and Linda’s traits manifest in complex ways within their children; Gene may seem like a carbon copy of Linda in his passion for music and loving personality, yet he also shares Bob’s external appearance and fondness for food. Louise inherits her mother’s extrovert demeanor and manner of speaking, but also possess Bob’s cynicism. And Tina, my personal favorite, shares Bob’s monotone speech patterns yet also has Linda’s sweet optimism, which gives her character a both hilarious and interesting disposition. The other characters, though funny, bring nothing new to the screen with their personalities. Louise is the snarky younger sister who enjoys pranking her siblings, Gene is weird brother, Bob is the apathetic father with a heart of gold, and even Linda embodies the perky and optimistic mother. Compared to the rest of the Belchers, Tina is revolutionary in a sense.

Tina’s comedy largely stems from the fact that she remarks about subjects not often broached by 13-year-old girls on television. She is unashamed about her sexuality –she often fantasizes about boys’ butts and writes “erotic friend fiction” about her crush, Jimmy Jr. She just really enjoys looking at males, whether they be an entire baseball team in “Torpedo,” or her somewhat odd dentist, Dr. Yap. Her obsession with boys is not completely naive or innocent. Instead, it translates into bizarre scenarios –she dreams about zombies making out with each other and of an island where she can kiss as many boys as she wants. The show unapologetically delves into what being a 13-year-old girl really feels like, despite how occasionally odd and uncomfortable it may be. Tina is socially awkward and quirky and at times inappropriate, but always utterly unafraid to be herself. 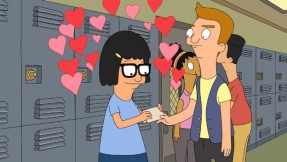 Part of this may be rooted in the fact that the creators initially intended for Tina to be a male. She is written as a boy, Daniel, in the original unaired pilot, but the revised script transforms her into a female character. However, certain jokes written for the character do not change at all; for example, her very first line in the pilot is that her crotch is itchy. A joke that is funny though overdone for a teenage boy suddenly becomes unconventional, slightly shocking and even funnier when written for a teenage girl.

However unlike any other girl Tina may be, in certain respects, she is exactly like every other girl. She shows an eagerness to grow up and sit at the ‘adult table’ in “Turkey in a Can,” she moons over boys, and she experiments with makeup and changing her look. However, unlike many shows where this typical girly-girl character is one-dimensional or stereotypically popular and pretty, Bob’s Burgers juxtaposes Tina’s girly qualities with her social awkwardness and plain appearance. In doing so, the show actually creates a realistic female teenager. All Tina’s problems are not magically resolved –her makeovers are never successful, her crush often ignores her, and her father is unwilling to let her grow up. The show allows Tina to be everything –both smart and concerned with her appearance, sometimes confident in herself and at other times unsure, because why should a character be pigeonholed into one specific stereotype? She says it best herself in “Weekend at Mort’s” when she declares, “I am a smart, strong, sensual woman.” Tina encompasses all aspects of being a teenager, from the awkward to the exciting, which creates a truly compelling character.

Such an approach to a young, female character is rarely seen on television. More importantly, the show does not mock Tina for being a weird character. It instead celebrates her weirdness, and her family (though perhaps because they are equally strange) never sincerely makes fun of her. Bob and Linda are careful to support her endeavors, no matter how odd, such as when Linda encourages her to read her friend fiction out loud in “Bad Tina.” Bob covers for her at the restaurant when she attempts to pursue an eccentric dance class in “Sexy Dance Fighting.” In “Bad Tina,” Gene and Louise mandate that they, as her siblings, are the only ones allowed to make fun of her and defend her wholeheartedly. This is contrast to other female teenagers in animation, such as Meg from Family Guy, whose family often mercilessly teases her and results in her low self-esteem issues. Tina largely experiences support from her family and perhaps for this reason, doesn’t feel the same need to fit in with the norm as Meg displays. She is comfortable with who she is, but also has periods of self-doubt that are universally felt. As a whole, her multi-faceted personality is nuanced and complex, and her crazy antics are always rooted in true character development rather than just for a joke, which is why we feel her triumphs and losses so deeply. We as an audience are always made to laugh with, not at, Tina, which makes all the difference.

Is the World Ready for an LGBTQ Disney Princess (or Prince)?
The History and Impact of Modern Cartoons
The “Actual” meaning of Encanto
The Appeal of the female characters in Arcane: League of Legends
The nature of Self in Centaurworld
Steven Universe and Fascism
Disney’s Live Action Remakes: Who are they for?