5 Reasons Why ‘Arrow’ is the Best Superhero Show Ever

Now entering the second half of its second season, it is safe to say that the CW has struck gold with Arrow. For those that don’t know, Arrow follows Stephen Amell as Oliver Queen, the billionaire playboy who is secretly a vigilante that strikes down crime with his trusty arrows. While the Green Arrow has been popular throughout its comic book run, the Green Arrow gained more popularity during Justin Hartley’s run at the arrow-shooting hero in Smallville.

Superhero shows as a whole have been exploding during the last decade, with the previously mentioned Smallville being one of the best known. Other than Smallville, shows like Heroes and No Ordinary Family came and went as networks tried to find a superhero show to last. Gone were the classic superhero shows that, while campy, paved the way for the modern superhero films and there seemed to be little hope that a superhero show could survive against crime dramas and sitcoms. Then came 2012’s Arrow, which took a Nolan-like approach and created a gritty show that has garnered positive reviews and a growing following. To many who watch the show, they understand why it’s so well liked and here are five of the main reasons why.

When you have typical superhero show, certain things are expected. In modern television, most of the high-tech equipment is render in post-production. Also, scenes are often filmed in front of a green screen due to budget constraints or a lack of fitting location. Without a big budget, these can look fake and ruin the realism that the actors are trying to depict. To say that Arrow doesn’t sometimes run into that would be a lie, but they often times use more practical effects which help instill a more realistic look.

Older shows like Lois & Clark: The New Adventures of Superman may have suffered greatly with cheap looking special effects, but that had to do with the technology of the time. With over a decade of technological advancements, newer shows like Arrow don’t often run into cheap looking special effects. That’s not saying newer shows are perfect, but Arrow used real locations and limited effects to lower the chance of bad CGI. Cheap effects don’t necessarily make shows bad, but it can be a harder sell for the viewer, especially when total immersion is the writer and director’s goal. 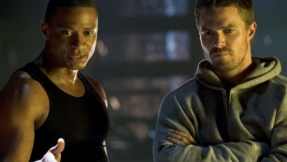 If anyone ever says they remember John Diggle from the comics, they’re a liar. Diggle is just one of the many original characters that see plenty of screen time on the series. During the course of the series, Diggle quickly proved that he is more than just a bodyguard and actor David Ramsey’s performance was reason alone for the character to be given a starring role. Diggle might not be in the comics, but his addition should be used as an example on how to add original characters to superhero shows brimming with comic book characters to choose from.

The most interesting characters might be the characters that are found in both the comic and the show, but are vastly different between the two. Felicity Smoak is one such example. When Smoak isn’t awkwardly flirting with Oliver, she’s saving his life with her hard to match computer skills. The comics also have a character named Felicity Smoak, who was the step mother to Ronald Raymond, aka Firestorm. The two characters are so different in personality that to call her a new character is more than fitting.

Another character that is a mix between is original and classic Arrow, is Thea Queen. The sister to the billionaire party boy originally appeared to be solely original, but as time has progressed, clues cued us in to where her character might eventually go. With the full name, Thea Dearden Queen, it now seems that Thea could become a sidekick to her vigilante brother. Either that, or the character might go in a completely different direction, the possibilities are endless.

Now to the meat and bones of the series, the classic characters we’ve come to know and love. Obviously there’s Oliver Queen/Green Arrow, the main character of the series. Unlike shows like Agents of S.H.I.E.L.D., where Agent Phil Coulson is the only big character to appear, Arrow took little time to establish big characters like Slade Wilson/Deathstroke, Roy Harper/Speedy and the dreaded archer known as Merlyn.

At this point in the series, Deathstroke has proven to be the most interesting of the three. For the majority of the first two seasons, we see Slade as a hero, helping Oliver survive while stranded on the mysterious island. Slade is similar to post-island Oliver in that he is an expert at hand to hand combat. Based on actions taken by Oliver, and not taken by Oliver, Slade changes greatly and forces a deadly rift between the two. More of that will probably be seen during the end of season 2 and the future.

What also deserves mentioning is the introduction of Barry Allen. At the end of the first half of season 2, Allen is introduced as a strapping young CSI and by the end of his episode it’s easy to guess where his character will end up. Allen might never be seen on Arrow again as there is a Flash series in the works, but his time on the show, no matter how small was a treat to all comic book fans. 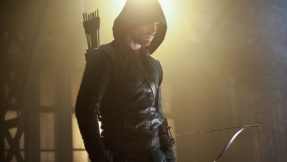 Like Smallville, Arrow was able to establish a new world meaning a new continuity. The series doesn’t have to worry about the comics or a film forcing them to change their established world. Marvel’s Agent’s of S.H.I.E.L.D. has encountered this as we the viewer know pretty much everything that went on before the series’ events, such as the world finding out about aliens and Iron Man supposedly being a big deal. One problem is that it’s hard to imagine a world where Iron Man is the most talked about celebrity because a cameo by Robert Downey Jr. is probably doubtful with a full schedule and all. Another problem is Marvel’s Agent’s of S.H.I.E.L.D. is more than likely going to be shaped by the movies, but the show probably won’t have the same effects on future movies. With Arrow having a potential spin-off, those two will be able to further establish their separate universe in a similar way to Marvel’s Cinematic Universe, but on a smaller scale.

What Arrow has, more than Smallville, Agents of S.H.I.E.L.D., the classic Batman and especially Heroes is that they can carry a scene together and do so more convincingly than most superhero ensembles. To say these are all Emmy worthy actors is a stretch, but for a CW show that gets less than 10 million viewers in the U.S., the acting is incredible. Like Supernatural‘s Sam and Dean, Oliver and Diggle are a great duo and Amell and Ramsey are the main reason for that. Add to that, the character Felicity Smoak helps increase the group dynamic, making the series more interesting as the weeks rage on.

Oliver Queen’s mother, Moira, and sister, Thea, also add range to the series by forcing Oliver to behave like a normal person, and not just a brooding vigilante. The character Roy Harper has also fit in nicely to the show, having a sincere relationship with Thea all while trying to figure out who the Arrow is. Susanna Thompson, Willa Holland and Colton Haynes, who play Moira, Thea and Roy, respectively, play off one another, and Amell, so well that the majority of the non-action scenes are still entertaining.

The camaraderie doesn’t seem to end when cameras stop filming either, as the cast seems to spend time with each other given the opportunity. While this includes conventions and interviews, Stephen Amell’s twitter account often features images of the cast doing fun things together.

While it is difficult to say that Arrow is the greatest superhero show ever, it is on track to outperform all the superhero shows to date. Arrow has a chance to live on for many years to come if it keeps on building on what it has already established. In the future they might have to worry about Netflix’s four superhero shows, and mini-series, but that’s not for another year. No matter how the Flash television series turns out, Arrow seems to be the show to beat.

Posted on Jan 17, 2014 by
Austin Bender
I attend college in hopes to one day work in film or theater, but until then I write reviews on the subjects I love.
Edited by Michelle Webb, Misagh, Taylor Ramsey, Dale Barham, Jordan, Robert Humphrey.
Follow