5 Reasons Why You Should Play ‘Magic The Gathering’

When you walk past a video game shop or a table top gaming shop, there is an undeniable stereotype about its customers that comes to mind. The image of spotty, doughy teenage faces spending their Saturday job wages on overpriced paints and deluxe edition discs are a scene often humoured, but they also deter a lot of customers from certain games, for fear of being perceived as one of those basement living hermits who confuses the real world with a pixelated fantasy alternative.

However, many of these games are highly enjoyable, with the fantasy aspect providing great levels of both fun and escapism. With it’s World Championship held in Amsterdam still fresh in the minds of its fans, a great example of this is the trading card game Magic The Gathering. Created way back in 1993, it was the first trading card game, and now has over 12 million players worldwide. If you are not one of those players but have always wondered about the possible enjoyment in Magic The Gathering and similar games, here’s 5 reasons to go and get yourself a pack of cards and a 20-sided dice and start playing.

Contrary to belief, games such as Magic The Gathering are a great way to have fun with your friends, and even make new friends. Magic has an organised tournament system with professional players, and for the less fanatical some game and comic book shops host their own tournaments for anyone to play. There are even open tournaments which give you a selection of cards to make a deck with, and at the end you get to keep them.

One of the increasingly rare factors about Magic The Gathering is that you have to actually be sat with another person to play with them. Many games today are focused on being able to connect with players on the other side of the world via the internet, and often the genuine socialising factor is forgotten. Whilst there have been online versions of the game, the most popular form of Magic The Gathering is the face-to-face competition. The open format of the game also gives little restrictions on the number of players in a single game, so no matter how many friends you encourage to play with you they will never be left out.

All aspects of Magic The Gathering involve a high level of strategy, from the way you build your card deck before playing, to how you use cards together in gameplay. Whilst the aesthetics and motifs of Magic stem from fantasy role-playing games, it boasts a far wider selection of cards, and a more complex set of rules and combinations of cards than most trading card games.

Despite this, Magic The Gathering is surprisingly easy to learn. For the more casual player only the basic rules of gameplay are needed, and it is only if you plan to enter competitions that you should probably read the rather long rulebook. The complexity of Magic is easily one of its strengths, as you come to appreciate the depth of the game, and begin to understand that with the new styles of card being released frequently the game is ever-changing and ever-adapting to the wider social aspects around it. A great example of this is the removal of demonic and occultist themes in the early stages of Magic The Gathering’s genesis, as the creators believed that the issue was too controversial at the time. Later on, in 2002, this policy was revoked, as the depiction of demons was less frowned upon by society.

Magic also makes you smarter personality-wise. Whilst games can be very drawn out and seem to take a lot of mental investment, it teaches you to be gracious in defeat as, after all, it is just a game. On the winning team you also gain a great sense of achievement, and many come to take pride in creating a deck themselves that works against anyone they play.

3. It’s cheaper than many videos games with a similar level of complexity

Unlike many video and online games, Magic The Gathering works on a physical basis, with no hidden costs. Once you have bought a card it is yours for as long as you want, with no season passes or restrictions on playing. To make multiple decks with great synergy and a great chance of winning against any competitor could cost more than your average board game or basic video game, but you’ll be free from bunny-hoppers and griefers, and similar to other table-top games there is almost endless variety in the games you will play. Going further than the game itself, each card colour in Magic The Gathering has its own storyline, making it much more interesting than the average “you’re in the army now shoot everyone” games.

Whilst Magic The Gathering saves you money, it could also be making you money. Some rare cards, such as the seemingly overestimated Black Lotus card has been known to sell online for around $1000, making the purchase of a pack a small price to pay. Another way to reduce the blow to your bank account is to purchase the cards from online wholesalers, where the cost of 1000 cards can be reduced from £266 (if bought entirely from 15-card booster packs) to around £30.

2. The artwork makes it worth the money

Each Magic The Gathering card boasts artwork from a number of talented artists. Hundreds of artists have contributed since the games’ genesis, with only two card designs from the original set still being used in prints today. Every card colour has a different style of artwork and the artists take this into account, with most of the designs focussing on religious, war or spell-casting themes. 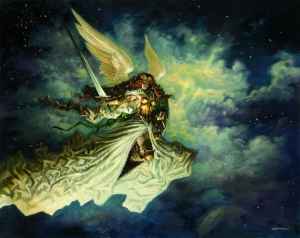 A great example of this (despite all of the cards being at a similar high standard) is Baneslayer Angel, which expertly contrasts the brightness of armour and the angel character with the intense darkness of the night sky.

Since Magic The Gathering was created, there have been re-prints of old cards to meet demand, with some being given a redesign to better fit the cards’ name or characteristics, as well as the foil versions of cards adding to the variation and value.

1. It has a great on-line community

With active forums on almost all major social networking sites, the on-line community for Magic The Gathering is immense, and its crown jewel is the official MTG website. It boasts details of the game, news on recent released cards as well as the daily newsletter which has articles from a host of MTG columnists.

The players themselves are always helpful to newcomers, and due to its wide audience there are many on-line tutorials for building your deck and learning the rules, as well as helpful articles explaining all the specific terms used in gameplay. The websites also provide information on upcoming events and has a list of official event venues, all with a weekly Magic The Gathering night which is open to all levels of player.

Magic The Gathering is not only a fun, surprisingly social and challenging game, but it is one that gives back to you, with free cards for going to events, and a range of prizes for competing in tournaments. Despite the reservations held by non-players about its ‘coolness’, the community will welcome you heartily and before long you will have wondered how you could have spent your time before, and how you could have existed without the great friends you make. It could be argued that it makes a dent in your pocket and student loan, but when compared to the amount you could spend on gaming consoles, the video games themselves and the endless accessories for them, it is a worthwhile investment. Getting started is much easier than you think, and now that your qualms have been pacified there’s nothing left to do but start playing!

Posted on Sep 12, 2013 by
Louise Egan
Writing most fervidly about film, animation, comics and games, but you'll get articles on almost anything if it catches my eye. Not afraid to criticise as well as champion.
Follow

Bioshock and the Illusion of Choice in Gaming
The Love of Farming Games
Do Gamers Today Complain Too Much?
Assassin’s Creed and Feminine Freedom
Horizon Zero Dawn and the End of the/our World
Mario, Link, and Scott Pilgrim: Relationships in Video Games
Casual Violence in the Borderlands Franchise