Disney’s acquisition of the Star Wars franchise is old news now, and whether you were elated or heartbroken at the deal you can at least look forward to more big screen excitement in a galaxy far, far away. To some however it was Disney’s closure of LucasArts, developer and publisher of just about every Star Wars video game, that proved a great deal more unsettling. With developing rights now handed over exclusively to video game giant Electronic Arts (EA), you can be sure that something will be released sometime soon. What games are planned and how good they will be however is another matter, and one that will only be settled at EA’s bidding. In the mean time, here are five games EA should make that would gain them a huge audience, and above all else be fun to play. 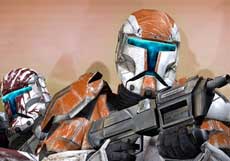 The original Republic Commando didn’t quite get the fanfare it deserved. Developed and released by LucasArts on PC and Xbox in 2005, you led a band of clone troopers against the Trade Federation in a blend of first-person shooting and squad-based combat that lent the game a tactical angle rarely seen among games. The usual FPS action was all there: shooting blasters, mindless lobbing of grenades, and some cool breach-and-clear actions courtesy of the squad-command system. One other highlight was stabbing a battle droid in the throat with your wrist-blade, and being liberally doused in your enemy’s mechanical fluid. It was rather visceral, but a nice touch that served to remind you that war can be hell, even for clone troopers.

A sequel titled ‘Imperial Commando’ was planned amid development of Republic Commando, but for reasons unknown was cancelled. The last decade’s spate of FPS games have relentlessly focused on the multiplayer experience with a so-so single player campaign tacked on – we’re looking at you, Call of Duty and Battlefield. It’s unlikely then that EA would ditch the multiplayer aspect; indeed, the game’s format lends itself perfectly to a four-way, Borderlands style co-op effort between you and some buddies. With motion-sensors now a solid (but somewhat unwelcome) addition to next-gen consoles, issuing commands with a half-interested wave of the hand would be another gimmick that may help shift some more copies. Think Ghost Recon, but in a brilliantly designed Star Wars environment that evokes your favourite Stormtrooper-esque memories. In terms of competition EA might primarily be looking at Epic Games’ Gears of War as a rival, however given GoW:Judgement’s poor showing in sales recently that series’ future may be in doubt. Executed correctly, Republic Commando could stand head and shoulders above other shooters, but only if it fully integrates you into the beloved Star Wars world. 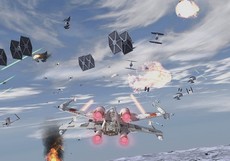 The original Rogue Squadron trilogy was developed on Nintendo’s N64 and Gamecube by LucasArts and Factor 5, in a period stretching from 1998 to 2003. Piloting an array of ships both Rebel and Imperial as Luke Skywalker and Wedge Antilles, missions pitted you against Imperials on numerous planets and in deep space. Vehicular-based games, and especially ones revolving around aircraft can be hard to get right, but 1994’s TIE Fighter proved that you can make space combat exciting, and even more so when you play as the enemy blasting Rebel scum out of the sky.

Flight games have been lacking as of late, and 2009’s IL-2 Sturmovik: Birds of Prey and 2011’s Ace Combat: Assault Horizon are essentially your only realistic ports of call. Those games were great, but since Star Wars: Jedi Starfighter in 2003 we’ve been missing flying about in ships and perfecting our proton torpedoing. If EA lent more towards a simulation of space-combat and further from a ‘shoot until you hit something’ style of play, we could have a seriously engrossing and challenging flight-simulator to play with. Perhaps most important to this game would be the use of sound, and no Star Wars flight game would be complete without the howl of a TIE Fighter or exploding-plasma sound of X-Wing cannons. In terms of setting, the game could potentially cover any time period from the Clone Wars to the Empire, although it might be interesting to experience the power shifts and changes between those two eras. Epic battles of 32-plus players would no doubt be entertaining, so let’s hope we can turn on our targeting computers once more.

3. Knights of the Old Republic III

The first two entries in this PC/console RPG series were nothing short of awesome. The first KotOR was developed by RPG masters BioWare of Mass Effect fame, with the sequel helmed by Obsidian Entertainment. In a galaxy an even longer time ago (about 4,000 years before Anakin entered his emo phase) there were Jedi and Sith in abundance, duking it out for control of the galaxy. In the middle was your own customizable character, the paths of Light or Dark temptingly open before you. With a medley of comrades in tow, exploring planets that were little-seen or even unheard of in any of the films – Korriban, Kashyyyk and Nar Shaddaa come to mind – was enormous fun, strengthened by the tactical challenge of the turn-based combat system.

Like Republic Commando, a further sequel was planned but cancelled by LucasArts due to various in-house problems, and to date no sequel rumors have surfaced. Given the popularity of RPG’s like Mass Effect and XCOM: Enemy Unknown, there is certainly room for another open-world sci-fi game, and one to add to the already excellent and expansive Star Wars canon. Graphics were never really a concern for the KotOR games (not they were poor by any means), what mattered was the storytelling and characters. Both BioWare and Obsidian did great jobs, but the single-player experience is something few games nowadays get perfect. BioShock and Deus Ex: Human Revolution absolutely nailed it, and what would also make KotOR III so great is the complete redundancy of multiplayer. The game should be focus entirely on single-player, because after all it is your character to enlighten or corrupt as you see fit. Most importantly of course is the fact that BioWare is owned by EA. Both parties are therefore perfectly set up to continue the saga and take us on more journeys through the Force and brave new worlds.

The most recent – and last – Star Wars game proposed before LucasArts went kaput was 1313. Controlling a bounty hunter in a third-person shoot ’em up, the player is stripped of the Force, lightsabres and robes, and dumped in the seedy underbelly of the galactic centre of Coruscant. The little gameplay footage there is looks seriously impressive: it’s pretty, the action is fast-paced, and the overall tone has a genuine sombre grittiness that Star Wars has been craving desperately since Empire.

With LucasArts gone 1313‘s future is rather uncertain, and the lack of character and plot details makes it even more difficult to gauge what paths the game would lead us down. Rumours abounded that the protagonist was a young Boba Fett, the badass who makes inter-stellar bounty hunting a career path for young ‘uns to aspire to. Han Solo was another possibility, and who wouldn’t want to play as that lovable scoundrel who always shoots first. LucasArts have considered sourcing the game out to external developers in the hope that their hard work will not have been in vain, but so few details have been released that nobody except the people at EA and LucasArts can say for sure where 1313 is headed. Suffice to say that it would be a travesty and a tragedy should it never materialize, but keep those fingers and toes crossed for a new hope. 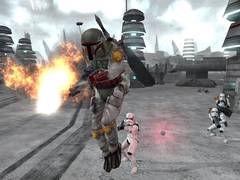 This is the game that everybody has been wanting to play. Of course that’s only apparent from the amount of pleas on nearly every Star Wars-related forum, but there’s no denying that the prospect of more frenetic combat across a huge battlefield is incredibly exciting. Pandemic Studio’s first two offerings in this series offered a huge range of choices: Clone Wars or Galactic Empire? Rebel or Imperial? Tank or spaceship? The best thing about Battlefront was the freedom to shape the battle your own way, and the addition 0f playable ‘hero’ characters both good and bad in Battlefront II simply added to the mayhem.

Battlefront‘s closest relative is surely EA’s own Battlefield series (do these guys own everything or what?), meaning the company has plenty of experience with players blasting each other apart on opposite sides of enormous game maps. Given the format and scale of Battlefront, multiplayer would obviously be a huge part of gameplay and marketing, and it would undoubtedly be a thrill to face off against other players as you unleash hell with a blaster or thermal detonator. EA’s ace up the sleeve here is the stunning Frostbite engine, now in its third incarnation. They used it to great effect in Battlefield 3, and you also have to consider the implementation of ship-to-ship combat. If Rogue Squadron chooses to focus more on simulation, then Battlefront is the perfect opportunity to blend on-foot and mid-air combat into a hectic mixture that reflects the best of Battlefield’s combat, and the best of Star Wars’ technology. With the new trilogy on the way, Battlefront III could be the game that introduces us to the next set of heroes and adventures aiming to endear themselves to us all. The planned ‘Star Wars: First Assault’, was an online multiplayer FPS that looked promising but like 1313 was cancelled when LucasArts got closed, meaning that nothing is certain for a large scale military game just yet.

It is difficult to say which, if any, of these games will actually see the light of day. Because Star Wars is one of the biggest and best franchises in the history of entertainment, the slightest whiff of a new game will be picked up by the internet in less than 12 parsecs – essentially, very quickly. If you were to put money on which of these would be made first, then Battlefront III would be a sure-fire winner. It has the biggest audience appeal, would be the most fun, and from a business-orient the biggest potential for increasingly-implemented Downloadable Content (DLC). EA have an enormous cash cow on their hands with Star Wars, and to demonstrate this consider that the franchise’s video game sales so far total a staggering $2,900,000,000. That’s nearly 3 billion dollars worth of entertainment, from 1983 to 2012. If plans for the next saga go ahead, then there will be at least another five years of films to exploit. The best news is that EA will announce their intentions for the franchise at E3, so it’s only a couple of weeks until we get a glimpse of what awaits us. Will EA follow the Light and deliver some stunning next-gen products that capture everything you’ve ever held dear about Star Wars? Or will they turn to the Dark side and produce some mediocre games that reflect the company’s often acknowledged lack of input like Crysis 2 and Medal of Honor? Only time and a little patience, padawans, will tell.

Posted on Jun 4, 2013 by
Sam Walker
Masters in English Language Studies. Whether it's films, games, comics, cars, design - you name it, and I'll probably be interested!
Follow

Games as Art: Displacement within the Art Gallery
Dungeons and Dragons OGL Upset
Bertold Brecht’s distancing in Video Game experiences
The mod – new gameplay and community
The Minecraft loophole: a library of banned journalism
Storytelling in Gaming
The Outer Worlds, a centrist’s critique of capitalism.