Fire Emblem’s Use of Numbers to Tell its Story

In video games, particularly in RPGs, the story and the gameplay exist on two isolated planes due to their contradictory nature. For example, when a character dies in a cutscene and cannot come back to life with a revival spell or item it makes the player question why these tools they receive during the gameplay cannot apply to the story. Another is when a character in battle can take hits from mythical creatures and deities but dies to a stab wound from a sword during a story event. As described in The Play Versus Story Divide in Game Studies: Critical Essays, it is stated, “…in emphasizing only the game’s story the question of what the player does is shunted aside.”

While it’s possible for a perfectly coherent and satisfying narrative to come from games that segregate these two core elements, an essential part of what makes video games unique is lost. Player input and the decisions he makes throughout the game is a significant part of the narrative that ends up developing throughout game time. Gameplay cannot simply be ignored due the nature of the medium.

Fire Emblem is an example of one of the series that manages to marry these two elements together in a natural way. Originally released in April 20th, 1990, Fire Emblem: Shadow Dragon and the Blade of Light told the story of the Marth, prince of the kingdom of Altea trying to regain his kingdom and calm the seas of war in the continent of Archanea. Throughout the game, he recruits several characters of varying backgrounds to join his army, and these are the units that follow him into battle. Unfortunately, due to the limitations of the system, all the characters not relevant to the plot receive no dialogue or interactions to flesh them out after their introduction scene . In order to get around this wall, Fire Emblem used a more nuanced method of characterization to flesh out the minor characters: the stats and growths of a unit.

The first example comes from the very beginning of the game with the elderly Paladin, Jagen. Depicted as an old man approaching his 60’s, Jagen starts out with high stats and in a 2nd-tier class. He’s easily able to dispatch any of the enemies that threaten the weaker units such as Marth or Caeda. However, his drawback comes in the form of his growths. In Fire Emblem, the stats going up are dependent on chance, and each character was a built-in percentage for each stat going. Marth has a 90% of his HP going up, so for every level, 9 times out of ten the stat will go up by one point. Jagen is unique by having his highest growths be 10% some stats such as Strength and Skill and 0% in several others such as Luck and Defense. Because of how static Jagen is, he will rapidly become replaced by other units such as the younger Cavaliers Cain and Abel who have much more potential.

However, it’s through these numbers that give Jagen his own narrative. There’s nothing more for Jagen to learn as a soldier because he’s already much past his prime and has already spent decades training. Now, as an older man, he’s meant to pass the torch along to the next generation of soldiers that Marth recruits. He’s there to assist when he needs to, but he’s also not meant to remain on the battlefield for much longer. Not only does this add realism to this character, it also gives him a role in the narrative crafted through the gameplay. Simply by going through the maps in the game, the player understands why Jagen is there and why he is the way he is without any need to explain. It weaves a narrative by using Jagen’s growths to its advantage without the player even realizing it.

Renault, A Bishop with no Faith

Jumping forward a few generations, we have one of the three GBA title, Fire Emblem: Blazing Sword that uses a unit’s statistics to foreshadow their backstory. Renault is a Bishop late in the game at a point where the player more likely than not has his party all set for the final chapters and has no more room for another Bishop as Lucius fills that role nicely. A quick glance at Renault’s stat screen shows very high Skill, Speed, and Defense for a magical unit, but extremely low Magic that makes him almost completely unusable. 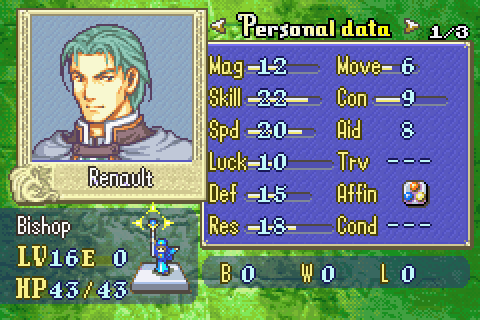 However, Renault’s enigmatic personality and stats serve to give intrigue to his character and perform their job as a hook for this mysterious unit. As it turns out, Renault’s stats are perfectly fitting for a character with a history like his. Bishops, Monks, and Clerics–those who use light magic–gain their power through faith in their religion, yet Renault doesn’t seem to have much of that. 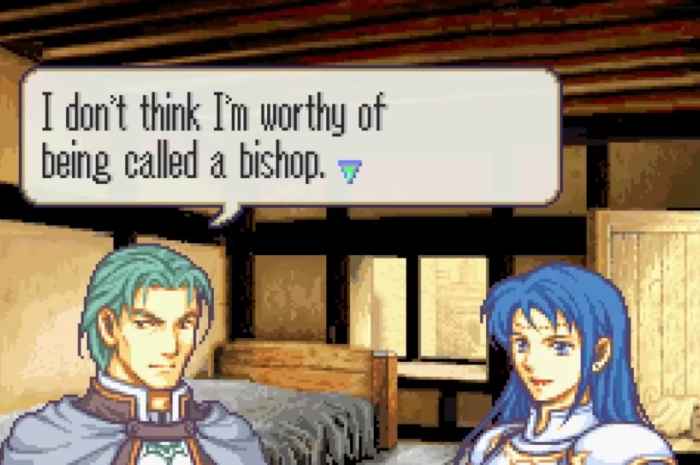 I…I lost a friend. A man I could’ve called my brother. But when he died, I knew nothing of prayers, of forgiveness. I only knew how to bash another man’s skull… So I cast aside my weapons and knelt for the first time…to mourn for my fallen friend…Forgive me. I am a fraud. I can offer you no solace.

As revealed in this conversation with Isadora, Renault was not originally a Bishop, he was a soldier and a fighter that fought alongside his friend for much of his life. It’s why his other stats besides Magic and Luck are so high in comparison. As the conversation with Isadora about her troubles with the lives she has taken throughout the war continue, he still cannot offer her guidance despite being a man of faith now; and his low Magic reflects that. Renault didn’t seek religion because he believed in the teachings of the church, he sought it to seek peace within himself–and he failed at that as well.

Faye, An Obsessive and Harmful Love

The final example comes from the latest installment of the franchise, Fire Emblem Echoes: Shadows of Valentia, a remake of the second game of the series, Fire Emblem Gaiden.

One of the optional characters gained at the beginning of the game is Faye, a young girl who hails from the same village as one of the protagonists, Alm. She is characterized mainly through her one-sided attraction to Alm and her determination to stand by his side, as shown through most of her conversations with him and her supports. Considering recent character such as Tharja and Camilla, women with obsessive love towards the protagonist and portrayed as quirky by the narrative of the game, t’s easy to imagine Faye as a continuation of these characters. 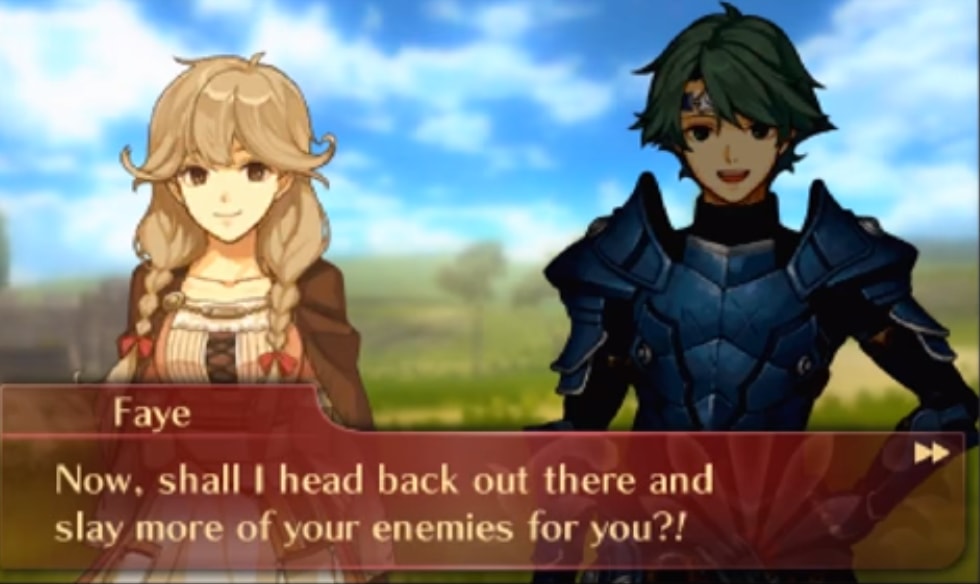 Faye: It’s so cold in the Rigelian Empire— nothing at all like Zofia. When we first left Ram, I never dreamed we would come so far. I hope Ma and Pa and Nana are doing all right without me… I send them letters, you know? Just the other day, I got one back. They said I talk too much about you.

However, Faye manages to rise above just a silly minor character that’s used for a few gags. In Fire Emblem Echoes, after two characters share a scene together, known as a “support,” they will receive a small bonus in battle as long as they stand a certain distance from each other. This has been a feature in the series for most of its installments, and Echoes proudly boasts it as well. What makes Faye stand out in the game, and every other installment in the franchise, is that while she gains an impressive boon to her Hit and Crit percentage, she receives a heavy penalty in her Avoid while Alm does not. Avoid is a critical stat in combat, as taking any sort of hit brings a unit closer to death.

This adds another layer to Faye’s love towards Alm. Although it greatly benefits her, her relationship with Alm provides a heavy consequence as well. It actively puts her in harm’s way. So why purposefully make it so that she receives a penalty in her support bonus when no other character in the series has had this happen to them?

The reason why is to characterize her and her love for Alm as unhealthy.

As seen in her character ending in the credits, Faye does not overcome her one-sided love for Alm and is implied to abandon her family in her village to stalk to visit him without even considering her husband or children’s feelings. As a minor and optional unit, Faye doesn’t get cutscenes or too much text to develop her character. Even so, the developers still managed to paint her as a woman with an unhealthy obsession that continues to haunt her to this day with a simple paragraph and the support bonuses she gets after speaking with Alm in combat.

The bonus adds a new dimension for Faye and foreshadows what her eventual fate with be. It tells the player that her love of Alm does indeed push her forward and allows her to find her true potential as seen through the high Hit and Crit increase, but it also negatively impacts her as well. It’s a perfect combination of plot and gameplay merging together in order to give Faye her own narrative in this grand story of wars and gods.

As technology improves and cutscenes become a larger part of video games, it important to remember how gameplay can also be used to develop a narrative and how it’s a significant part of gaming. Ignoring it in the process of developing a story is simply crippling the narrative as that’s a significant part of the art form that is being ignored. With this phenomenal series as a shining example of gameplay mixed with story-telling, let us see how the next upcoming entry in the Fire Emblem franchise will present its story with its numbers.

Posted on Aug 2, 2018 by
platinummad
Contributing writer for The Artifice.
Edited by JamesBKelley.
Follow