From Helen of Troy to Eguchi Aimi: The True Story of a Beautiful Lie

One would think that a pop band with more than eighty members would be thinking about slimming down a little, not actively recruiting new members. But this is precisely what the phenomenally successful Japanese girl group AKB48 continues to do year on year. Given its sheer size, AKB48 is sub-divided into strictly ranked teams, and the ultimate aim of its veteran members and newbies alike is to get into the one that actually lets them mime and dance on stage: Team A. The rivalry must be intense, and it is all too easy to imagine that accusations of conspiracy get flung around on a daily basis. But in spite of this frightening prospect, AKB48 is still flooded with audition videos from eager sixteen-year-olds (they may be older, of course, but the point is that they look and sound like a sweet teen) who are desperate to join the cutesiest gang around.

It is always an exciting occasion when a new girl is admitted into the AKB48 family. But one girl generated a particularly strong buzz of interest from fans and the general public. Making her debut in June 2011, sixteen-year-old Eguchi Aimi from Saitama immediately stood out from her peers: she was not only prettier than all the other girls, she sang better than them, too. In fact, she was flawless – it was as though someone had taken the very best attributes from the existing band members and synthesised them to create a perfect pop star.

Well, as it turns out, that was precisely what had happened. Eguchi Aimi is the world’s first cyber pop star – a computer-generated composite of six girls’ faces and voices. Yes, those fine white teeth of hers are made up of millions of pearly white pixels. Pretty remarkable, really.

But unsurprisingly, ever since she had her beans spilt, the poor girl has been subject to admiration and criticism in equal measure. Some welcome her as a harbinger of an exciting technological future when we will all teleport to work and wear shiny bodysuits that never get dirty. Others, on the other hand, regard her with resentment and single her out as yet another symptom of a messed-up society that is too obsessed with an unachievable ideal of beauty. Along with the airbrushing habit of the fashion and cosmetic industries, Eguchi Aimi has been criticised for making impressionable young girls feel insecure and unattractive in their own skins.

Of course, we shouldn’t feel too sorry for Eguchi Aimi. After all, she couldn’t care less. But let us not be too hasty in our judgement of her creators. Step back in time, and it becomes clear that these Japanese scientists only did what artists had been doing for millennia. The story begins with an ancient Greek painter of the 5th century BC, Zeuxis. None of his paintings have survived the ravages of time, but we get a fascinating glimpse into his approach from various written records. A particularly popular account tells us that Zeuxis used five different models for his painting of Helen of Troy, the dangerously beautiful daughter of the god, Zeus. 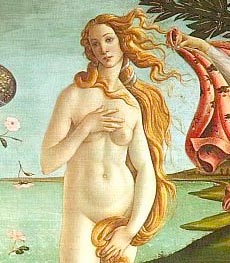 This account of Zeuxis and his five models became very influential during the Italian Renaissance, and consequently, there was a growing demand for portraits of composite ‘beauties’. One prominent artist who specialised in painting beautiful imaginary women was Sandro Botticelli, and his paintings manifest the same obsession with ideal beauty as Eguchi Aimi. Of course, beauty is subjective and it varies from culture to culture, but the principle remains the same. So whereas the modern Japanese ideal of beauty is a fresh-faced teen with a funky hairdo and inflated pupils, the Italian ideal looked like Sandro Botticelli’s generic women: voluptuous and long-limbed, with a large forehead and tumbling locks of golden hair. Oh, and judging by the nude damsel in Botticelli’s iconic painting The Birth of Venus (1486), they had to have weirdly slumping shoulders and painfully dislocated elbows, too.

This obsession with ideal beauty was so viral in Renaissance Europe that one very eccentric artist actually dedicated his entire career to making a mockery of it. 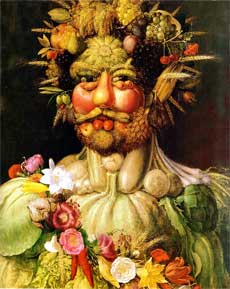 And his legacy is possibly the weirdest and most delightful collection of portraits ever to have been conceived. For his portraits of his enthusiastic patrons at the Habsburg court in Vienna, Guiseppe Arcimboldo (1526-1527) synthesised not the best attributes of the human race, but those of the vegetable kingdom. So juicy grapes might represent a generous mop of hair; peaches bursting in their skins could serve as ruddy cheeks; and a warty cucumber made for a perfect nose. These are hardly the most flattering portraits in the world, but they are quite effective at making us remember the “face” of those who commissioned them.

Clearly, the obsession with ideal beauty has been around for a very long time, and it probably isn’t going to disappear any time soon, either. The only real difference between Botticelli’s women and Eguchi Aimi is that we no longer rely upon artists to give us glimpses of ideal beauty, but scientists and nerds. They are the true idealists of this age. So although art used to be the arch nemesis of humble nature, technology has take over that role.

The prospect of encountering more cyber beauties is rather unsettling, because unlike painted portraits, they can talk – and it probably won’t long before they will be walking amongst us, too. We are only a few technological steps away from the nightmares of The Matrix (1999), Surrogates (2009) and other similar dystopian sci-fi fantasies. In spite of our good and innocent intentions, we might end up creating a monster. After all, this is precisely what happened to the idealistic young scientist in Mary Shelley’s Frankenstein (1818). So to end with a timely message of caution, here is an extract from this most chilling of gothic tales:

‘How can I describe my emotions at this catastrophe, or how delineate the wretch whom with such infinite pains and care I had endeavoured to form? His limbs were in proportion, and I had selected his features as beautiful. Beautiful! Great God! His yellow skin scarcely covered the work of muscles and arteries beneath; his hair was of a lustrous black, and flowing; his teeth of a pearly whiteness; but these luxuriances only formed a more horrid contrast with his watery eyes, that seemed almost of the same colour as the dun-white sockets in which they were set, his shrivelled complexion and straight black lips.’

We live in a brave new world. Who knows whether one of Eguchi Aimi’s descendants will turn out to be the next Miss Universe or a monster? 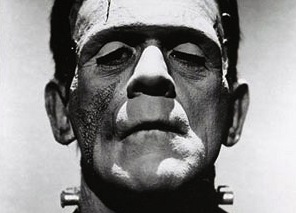 Women, Culture and Politics: Buffy’s Critical Bite
Page to stage: adapting works for live performance
“I Don’t Like ****, I Don’t Go Outside” An Exploration of Depression
The Fashion of the Met Gala: Why Are We So Obsessed?
September 11 in the Arts
The Mystery Behind The Influence of Instagram And The Popular Culture Industry?
The Influence of Social Media Marketing on Artists