Inside Out and St. Thomas Aquinas’ Philosophy of the Emotions

What does a colorful animated film and the writings the greatest philosophical mind of the Catholic tradition have in common? “Nothing,” most would say. Casually considered, the Pixar film exploring a little girl’s mind, and the discussion of the human soul in the Summa Theologiae have nothing significant connecting them. A more discerning mind, however, may recognize some consonance between the two. Both discuss human emotions, though their methods certainly don’t suggest any strict correspondence. Indeed, though each understand differently the role of the emotions in human flourishing, both, nevertheless, come to a remarkably similar conclusion with respect to the emotions’ propensity for harm and for good in the human person.

Emotions in the Summa Theologiae

St. Thomas Aquinas, in the Primae Secundae Partis of the Summa (questions 22 and 23, to be precise) gives the most comprehensive account of emotion and its role in the human person out of anyone in the tradition. He calls them “passions of the soul”–passions in the sense of being acted upon by something, as opposed to actively bringing something into being. That is, the essence of an emotion consists in a response to something. It begins with something acting upon the agent, it is not something the agent initiates. He acts in response to something outside of him, to things that impress upon him from the outside world. They are responses to something done to us, rather than something we do proper.

Division of the Emotions

An emotion, St. Thomas says, belongs to either the “concupiscible” or the “irascible” appetite. The one refers to the difficulty in attaining the desired object, the other as to whether the object is perceived as good or pleasurable. To the concupiscible appetite belongs six emotions, Love and Hate, Desire and Aversion, Pleasure (Joy) and Pain (Sorrow). To the irascible belongs Hope and Despair, Fear and Daring, and Anger. All others we might consider casually as “emotion”, he would say, are but fine shades of the primordial eleven here described.

Now, it seems evident St. Thomas would not give the emotions the primacy of place among the human faculties, but what role does St. Thomas give the “passions of the soul” in determining one’s personality and indeed, who one is as a person? In the first place, following Plato and Aristotle, he divides the human soul into the “intellectual” part and the “sensitive” part. Now, the “ruling principle” of the human soul is reason, found in the intellectual part. Reason is where one finds the imago Dei (the “image of God”): man rules himself through reason, unlike the lower animals who are moved by their passions. Emotions belong to the sensitive part of the soul. Therefore, emotion must be subordinate to reason.

However, it must never be thought that St. Thomas condemns the emotions. They are indeed subordinate to reason, but since man is body and soul, the emotions, and emotional responses, are an important component in reaching his final end. Emotions are not bad; they become bad when they supplant reason and control us, instead of us controlling them. Properly ordered, emotions are of vital importance in leading man to love what will bring him to his final end, and shun what will impede the consummation of that end. Reason needs to restrain, temper, and order them to their proper objects, but since man is body and soul, they, therefore, are integral in leading him to his final end. Emotions must be educated, be subject to reason so that man may love and desire what he ought–but never denied outright.

Emotion as Prior to Reason?

The film Inside Out presents an account of the emotional life of the person that, again, appears to have little to do with the account given by St. Thomas, and yet enough similarity to warrant a closer investigation. In the film, there are five emotions that, essentially, determine all aspects of Riley’s personality: Fear, Anger, Disgust, Sadness, and, the ringleader of them all, Joy. As such, they help form what sort of memory her core memories will be, which in turn form the primary determinants of her personality, in turn determining her overall health and well-being. However, her emotions are not wholly in charge: unlike a Shelley or a Byron, the film does not imply that all emotional outpourings are good, or even healthy. Rather, some sort of balance must be maintained among them if Riley is to feel and respond to the world as she ought.

The proper balance seems to imply some sort of rational control with regard to emotional responses. After Joy and Sadness are lost in the deep recesses of Riley’s mind, the other three find themselves tasked with somehow maintaining Riley’s equilibrium without Joy–a task for which they prove ill-qualified. The scene with her family at dinner best exemplifies the importance the film places on the balance and the tempering of emotional responses, with the conspicuousness of its absence. Without Joy holding everything together, she gives listless non-answers to her mother’s queries, and explodes at her parents with no real provocation. Without Joy, her other emotions are helpless to respond to a tense situation, turning what may have been your standard bad day during a tumultuous time of life into an unmitigated disaster, both for Riley and for her parents. The emotions may be more important here than they were to St. Thomas, but, nevertheless, they still must be tempered by some extra-emotional balance.

The Balance of Reason and Emotion

The conceptions of the human psyche presented by St. Thomas and Pixar seem absolutely disparate, mainly regarding the place each gives to the emotions. Inside Out seems to regard them as the primary determinant of personality and action–something with which St. Thomas and the tradition would vehemently disagree. In that sense, the film follows the modern and Romantic conceptions of the human person and the role of emotion, which say that emotion is “higher than reason,” than the classical and Christian tradition, which says that it is reason that truly makes us human. But such a judgement might be overly hasty. These differences do not mean that the two accounts, the fictional and the philosophical, are in conflict with one another. Indeed, they are remarkably consonant.

How so? Both accounts agree that some kind of balance must be maintained among the various emotions. No one emotion is allowed to have the unbridled reign to subsume all other functions of the passions and intellect in the abundance of its outpourings. Such non-rational emotionalism, as demonstrated by both St. Thomas and the film, prove destructive to the flourishing of the human person. For St. Thomas, when one gives the passions precedence over one’s reason, he becomes enslaved to his appetites, and thus diminishes the image of God within him. In Inside Out, when Riley’s more negative emotions are by happenstance placed in charge, she finds herself unable to cope with her stressful situation, through which she embarks on a mad flight to get back to her old home, and almost shuts down emotionally.

Clearly then, there must be some levee for the wave of passion. For St. Thomas, this levee is reason. Reason is what tempers the responses of the “passions of the soul,” so they we may respond to what we encounter, drawing towards it or moving away from it, in the way that we ought. For Riley, it is Joy that tempers the different emotions, causing them to work together in such a way that allows Riley to feel what she needs to and respond to her environment in the proper way. One may object that, coming from the Thomistic framework, a mere emotion is impotent to maintain a proper equilibrium in a human person. If Joy is understood purely in the Thomsitic sense outlined above, such an objection would have some merit. But, though joy as an emotion is present in the Thomistic framework, Joy in the film seems to encompass more than what St. Thomas would consider as belonging to the emotion, because the Joy it presents includes more than the mere pleasure indicated by the Summa. Rather, it is something more akin to the eudaimonia of Aristotle (activity of the soul in accordance with virtue over a complete life). Joy maintains the balance of the passions and intellect of Riley, though, unlike St. Thomas, the primary focus is upon her emotions. Joy is the linchpin by which Riley’s emotional equilibrium is sustained. 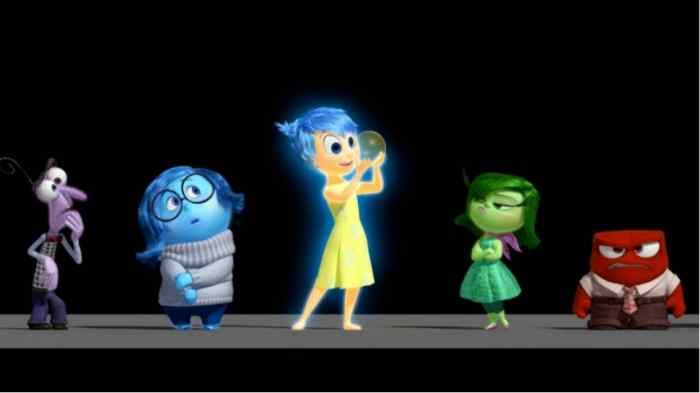 In either case, both accounts maintain that some rational balance must be maintained in order to have a virtuous person, or at least a happy person. Both agree that emotional responses cannot be totally unbridled, but there must be some sort of limitation, something tempering the emotional responses which is more than emotion, but does not reject them. While different in each, both agree in that such a ruling principle is what is needed in order for one to fully be human.